A photo of Turkish President Recep Tayyip Erdogan and US President Joe Biden has been shared in multiple posts on Facebook, Twitter and Instagram that claim it shows the Turkish leader “bowing” to his US counterpart. The photo has been shared in a misleading context. It actually shows Erdogan was standing up from his seat — not bowing — as he gave Biden a fist bump during a NATO summit in Brussels in June 2021.

Translated to English, the post’s Indonesian-language caption reads: “Glory be to God. What a good example of honourable character from the caliph of the end of time, Sheikh Erdogan, who bows to Joe Biden.

“Hopefully sympathisers of Turkey in Indonesia would admit and follow in his footsteps, bowing down to the US and its allies. 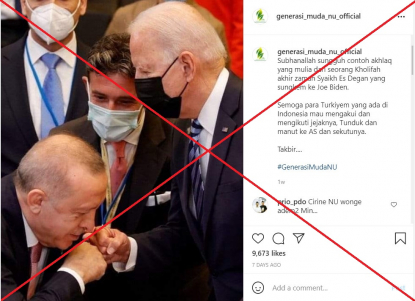 A Google reverse image search found this photo on the AP Images website, which belongs to the Associated Press (AP) news agency.

The AP photo’s caption says: “Turkey’s President Recep Tayyip Erdogan, center, fist bumps with U.S. President Joe Biden, right, as he stands up to greet him during a plenary session at a NATO summit in Brussels, Monday, June 14, 2021.

“U.S. President Joe Biden is taking part in his first NATO summit, where the 30-nation alliance hopes to reaffirm its unity and discuss increasingly tense relations with China and Russia, as the organization pulls its troops out after 18 years in Afghanistan.”

Screenshot of the AP photo

This video, tweeted by Turkish broadcaster TRT World on June 14, 2021, shows the moment captured by the photo at the 0:04 mark.

This is how US President Joe Biden greeted Turkey’s President Erdogan at NATO leaders’ summit in Brussels pic.twitter.com/SMyePttZtE

Below is a screenshot comparison between the photo in the misleading post (L), the AP photo (C) and the TRT World video (R):

Screenshot comparison between the photo in the misleading post (L), the AP photo (C) and the TRT World video (R)