Skip to main content
A practitioner performs a yoga position during an event to mark International Yoga Day at the Red Fort in New Delhi on June 21, 2021. (AFP / Money Sharma)

Multiple Facebook posts have shared photos of people practising yoga alongside a claim these were taken in Saudi Arabia. But this claim is false: the photos were in fact shot in the United Arab Emirates and India -- not Saudi Arabia.

The photos were posted on Facebook here in a public group with more than 70,000 followers.

“Yoga = If there is life then there is world. These are some pictures of Saudi Arabia. A slap on the face of those who say yoga only belongs to one community,” the Hindi-language post reads. 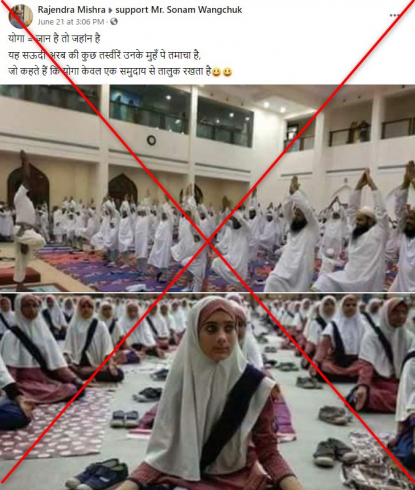 A screenshot of the misleading post taken on June 25, 2021

The misleading post circulated on June 21, the International Yoga Day that is observed mostly in India but also worldwide, AFP reported.

The photos were also shared alongside a similar claim on Facebook here, here, here and here.

However, the claim is false: the photos were not taken in Saudi Arabia.

A reverse image search on TinEye found the first photo was taken in the United Arab Emirates capital Abu Dhabi in June 2017. A nearly identical photo was published in this news report published by Gulf News.

Below is a screenshot comparison of the first photo in the misleading post (L) and the photo from Gulf News (R):

The location of the photo corresponds to this image geotagged in Abu Dhabi on Google Maps.

Further reverse image searches found the second photo was shot in Ahmadabad in Gujarat state in India, as shown in this June 2015 report by the Associated Press.

The caption to the photo reads, “Indian Muslim students practice yoga at a school ahead of first International Yoga Day in Ahmadabad, India, Wednesday, June 17, 2015.”

Below is a screenshot comparison of the second photo from the misleading post (L) and the Associated Press photo (R):

The report states the event was held at the “FD High School, Juhapura in Ahmedabad” -- which corresponds to this location in Gujarat on Google Street View.