A photo has been shared hundreds of times on Twitter and Weibo alongside a claim that it shows a tattered French national flag displayed at Hungary’s national museum as a deliberate “insult” to France. The claim is false: the photo shows the Romanian flag with a hole in the middle to symbolise the 1989 revolution.

The post shows an image of a desecrated flag next to a photo of a gun. The location tag reads: Hungarian National Museum. 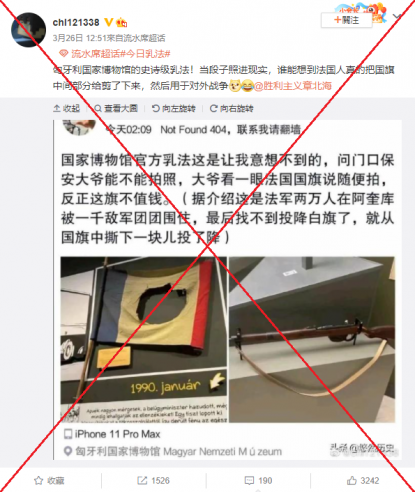 Screenshot taken on April 15, 2021, of the misleading Weibo post

The post falsely suggests the image shows a tattered French national flag exhibited in a bid to embarrass the country for allegedly surrendering in previous world conflicts.

“The national museum officially insults France. This is unexpected to me. I asked the security guard at the door if I could take pictures. He took a look at the French flag, and said it's ok as the flag is worthless anyways,” the Chinese caption reads.

“According to the introduction, this flag came when 20,000 French soldiers were surrounded by 1,000 enemies in Aquincum. In the end, they could not find a white flag for surrender, then tore a piece from their own national flag and surrendered”.

Aquincum was an ancient city in the Roman Empire situated in today's Budapest in Hungary.

The Weibo post’s caption translates as: “Epic insult to France by Hungarian National Museum! When [surrending] jokes become reality, who would have thought that the French people really cut the middle part of the national flag and used it in a foreign war?”

The photo of the flag also circulated here, here and here on Twitter alongside a similar claim.

However, the claim is false: the photo shows a desecrated Romanian national flag.

A reverse image search on Google found a larger version of the photo published in this article on Chinese video-sharing website AcFun on August 1, 2020.

Under the flag, the Hungarian-language text translates in part as “January 1990”.

A yellow note below the flag is circled in red. The text reads: “Romanian flag with hole” in English. 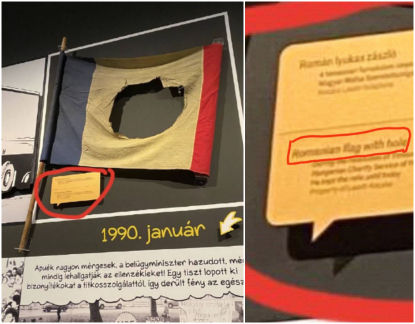 Screenshots captured on April 16, 2021 showing the flag photo and the expanded note published on AcFun

In December 1989, Romania was shaken by ten days of protests that culminated in the fall of Europe's last communist dictatorship.

Some protesters removed the communist coat of arms from the middle of then-Romanian national flags in what has since become a symbol of the 1989 revolution, as reported here by the BBC.

Below is an AFP photo taken at a march in Budapest in 2009 that shows the symbolic flag: 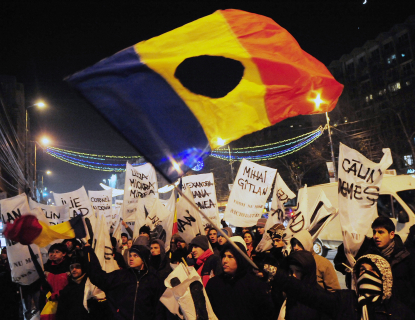 A Romanian flag with a hole, a symbol of 1989 Revolution, at a march commorating the start of Bucharest's riots against Ceausescu's communist regime in Bucharest on December 21, 2009 (Photo by DANIEL MIHAILESCU / AFP)