A photo of tunnel openings has been shared in multiple Facebook and Twitter posts alongside a claim that it shows India’s Atal Tunnel, the world’s longest tunnel which was recently inaugurated by Indian Prime Minister Narendra Modi. The photo, however, has been shared in a misleading context; the photo was published in 2012 and shows the Tom Lantos Tunnels in the US state of California.

The photo was shared on Facebook here on October 3, 2020. 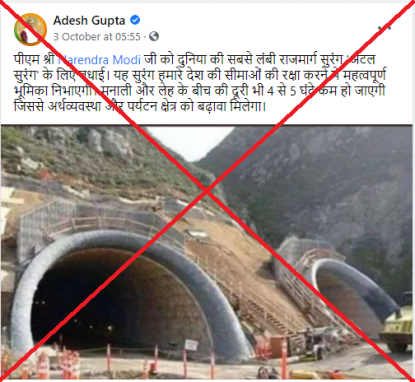 A post’s Hindi caption translates to English as: “Congratulation to PM Shri @narendramodi ji for the world’s longest highway tunnel #Atal_Surang. This tunnel will play an important role in safeguarding the borders of our country. The distance between Manali and Leh will also be reduced by 4 to 5 hours which will boost the economy and tourism sector.”

Prime Minister Modi inaugurated the nine-kilometer Atal Tunnel in the Indian state of Himachal Pradesh on October 3, 2020. The tunnel was named after former Indian Prime Minister Atal Bihari Vajpayeeh and has been hailed as a feat of engineering, as AFP reported here.

A reverse image search on Google found the photo in fact shows the Tom Lantos Tunnels along the coast of the US state of California. The tunnels cut through a region of the coastline known as Devil's Slide and are often referred to as the Devil’s Slide tunnels.

The same photo was published on a blog here on August 8, 2012. The webpage is titled: “INSIDE THE DEVILS SLIDE TUNNEL”.

Below is a screenshot comparison of the photo shared in the misleading Facebook post (L) and the 2012 blog photo (R):

“Politicians and guests cut the ribbon to open two tunnels that will replace a notorious stretch of California's Highway 1 at Devil’s Slide near Pacifica, California March 25, 2013,” reads a photo caption in parts.

An explainer video from the California Department of Transportation that shows matching images of the tunnel was posted here on YouTube on April 1, 2013.