A photo has been shared tens of thousands of times in multiple posts on Facebook and Twitter alongside a claim it shows a woman demonstrating against a rise in rape cases in India. The claim is false; photo has circulated since at least 2015 in reports about a performance artist in Sri Lanka. 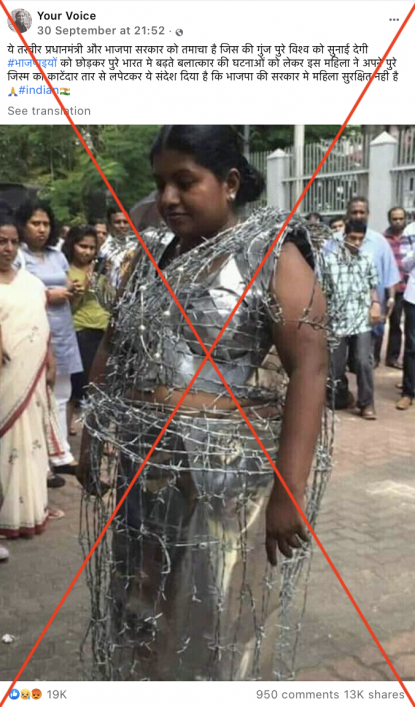 The post’s Hindi-language caption translates to English as: “This photo is a slap in the face of the prime minister and the BJP government that would be heard in the whole world except to BJP supporters. In the wake of rising cases of rape in the country, this woman has tried to give a message that women are not safe under the BJP government by covering her whole body with barbed wire.”

The photo shows a woman wearing a metallic dress with barbed wire.

A reverse image search on Google found the same photo published here on a wordpress blog on April 6, 2015. The article is titled: “Art Bursting from the Seams -- From March 19”. 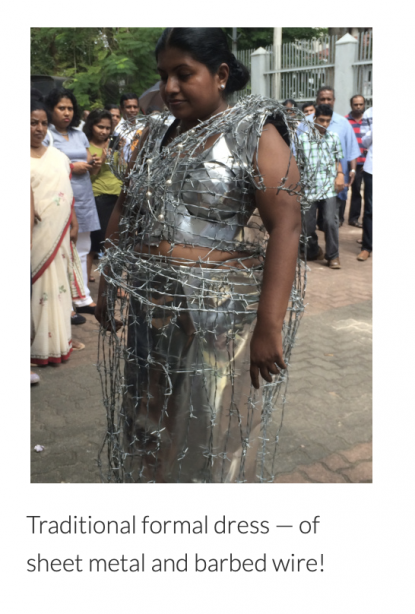 A screenshot of the photo in the wordpress website.

The article reads in part: “ We were part of a press conference with the Colombo International Theater Festival held at the German Cultural Center. We taught a 3 hour workshop for nearly 30 teens in Negombo. We explored various theater exercises leading up the creation of small original works based on their identified issues such as ‘world environment/pollution’ and ‘changing the president’.”

Below is a screenshot comparison of the image in the misleading post (L) and the photo in the blog post (R): 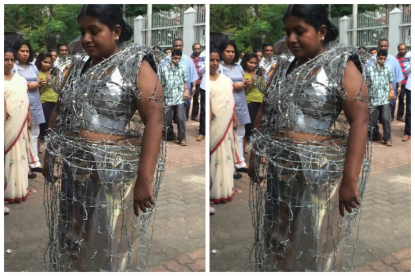 A screenshot comparison of the misleading post and the wordpress photo.

Another reverse image search on Google found a similar photo published here on a blog for a woman who identifies herself as Janani Cooray, a performance artist in Sri Lanka.

In the post published on November 3, 2018, she wrote that she performed in the wired dress in the Sri Lankan capital of Colombo in 2015.

The description of the performance reads: “Osariya dress signifies the importance of a Sri Lankan woman. Sri Lankan women, including myself, will enter that set of limitations when dressed in osariya. Powerful women leaders dress in this style on diplomatic, political and social occasions to advertise their status and importance.”

More photos of Cooray wearing the osaiya dress were published in her blog. A video of her performance was also published here on YouTube on November 4, 2018 on a channel that also carries her name.

Screenshot of Cooray in the osariya dress from her blog. 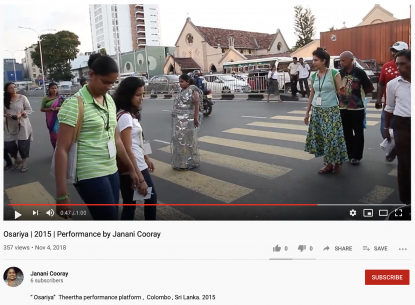 A screenshot of the Youtube video of Cooray’s Osariya performance in 2015.