A photo has been shared hundreds of times on Facebook and Twitter alongside a claim it shows a nurse apologising to a Muslim man after she blamed the Muslim community for spreading COVID-19 in India. The posts claim the nurse was forced to apologise by a local politician. The claim is false; the nurse, the politician and local police all said the photo in fact shows a man receiving first aid after sustaining a laceration to his leg; additional photos and footage also show the man’s injury.

The photo was shared more than 500 times after being published on Facebook here on April 24, 2020. 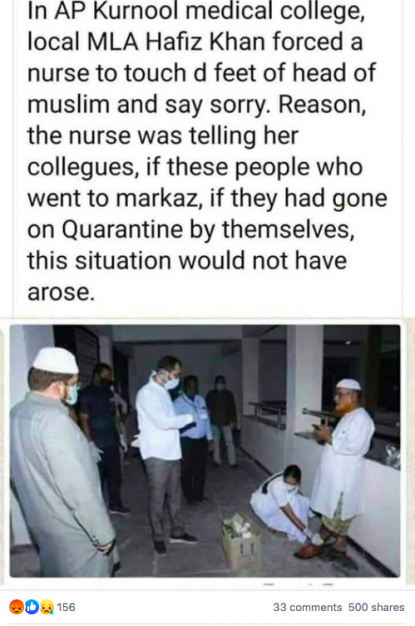 The text above the image reads as: “In AP Kurnool medical college local MLA Hafiz Khan forced a nurse to touch d feet d head of muslim and say sorry. Reason, the nurse was telling her colleagues, if these people who went to markaz, if they had gone to Quarantine by themselves, this situation would not have arose. [sic]”

The politician named in the post, whose name is correctly spelled Abdul Hafeez Khan, is a local legislator in the south Indian state of Andhra Pradesh (AP). Khan represents the city of Kurnool, which is home to the Kurnool Medical College.

The post’s mention of “markaz” is a reference to the Nizamuddin Markaz mosque in the Indian capital of Delhi. In March 2020, a religious gathering organised at the mosque by Tablighi Jamaat, an Islamic missionary movement, was identified as a major COVID-19 hotspot. The gathering sparked a manhunt across India after dozens of infections and several deaths were linked to the event, AFP reported.

In response to the misleading posts, Kurnool police wrote on Facebook on April 23, 2020 that the claim was “Fake News”. They also published additional photos that show the nurse was in fact treating the man for a leg injury.

“A senior citizen was injured during quarantine and it was Nurse who is doing first aid to him," the Telugu-language post reads in English. "Now people spreading fake news on this incident. Dear people kindly ignore this kind of fake news, [sic]”.

The post added that the man was a “highly diabetic patient” who accidentally injured his leg on a gate and that the nurse was treating the “patient to stop the flow of blood.”

Khan, the politician named in the misleading posts, also addressed the false claim on Facebook, publishing footage here on April 23 that shows that the man was being treated for a leg injury. “Fake news alert,” Khan wrote in the post.

Khan posted another video on April 23 on Facebook here in which the nurse provides additional details about the photographed incident.

Her Telugu-language statement translates to English as: “I gave him first aid but the blood was not stopping, so I firmly held his leg to stop the blood while we were waiting for the ambulance. There is no religious angle nor was Mr. Khan making me apologise.”