A video of young adults singing the Indian national anthem has been shared on Facebook and Twitter during the COVID-19 pandemic alongside claims that it shows American students performing to thank India for supplying the US with hydroxychloroquine, a malaria drug that has been involved in clinical trials for potential COVID-19 treatment. The claim is false; this rendition of the Indian national anthem was produced in August 2017 to mark India’s 71st Independence Day.

The one-minute video production of Jana Gana Mana, India’s national anthem, has been shared more than 800 times since it was published on Facebook here on April 25, 2020.

The post's caption reads: “Put together by USA students to Thank India for supply of Hydroxichloriquin [sic]”. 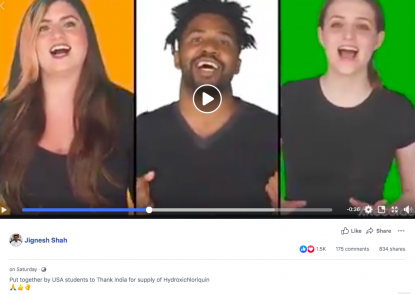 Hydroxychloroquine (HCQ) is an anti-malaria drug that has been used in clinical trials in search of a possible treatment for COVID-19. In early April 2020, India lifted an export ban on the drug and as of May 1, the country has reportedly sent millions of tablets of HCQ to the United States, according to this Reuters report.

The Indian national anthem video was also shared alongside similar claims on Facebook here and here; and on Twitter here and here.

A keyword search found that the video was originally published on YouTube here on August 12, 2017, on the channel of Anisha Dixit, a Mumbai-based video content creator.

The video is titled “Americans Sing the Indian National Anthem for the First Time | Rickshawali”.

Dixit also published the video on her verified Facebook page here on August 13, 2017, two days ahead of India’s 71st Independence Day on August 15.

Both the YouTube video and Facebook post include the following description: “On the occasion of our 71st Independence day, I wanted to celebrate global freedom and diversity. Unity and diversity is what India is all about and so is this video. Please stand up and let's celebrate different people from the world singing THE INDIAN NATIONAL ANTHEM.”

Below are three sets of screenshot comparison of the video in the misleading post (L) and the 2017 YouTube video from Anisha Dixit (R): 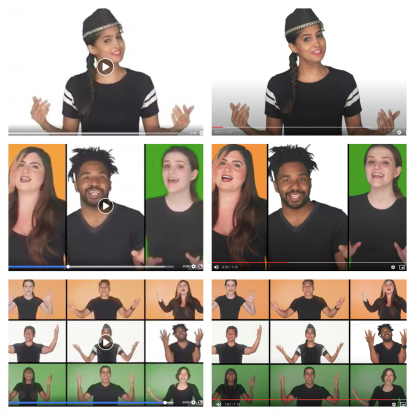 The 2017 rendition of the Indian national anthem also garnered media attention at the time. The Financial Express, an Indian business newspaper, published an article about the production here on August 15, 2017.