An image has been shared in multiple posts on Facebook, Twitter and Reddit alongside claims that it shows trucks carrying COVID-19 relief that were set on fire by rebels of the New People’s Army (NPA), the armed wing of the Communist Party of the Philippines. However, the image has been shared in a misleading context; it has circulated online since at least 2015 – years before the COVID-19 pandemic – in posts about supply trucks targeted by NPA rebels.

The image, which includes two photos of burnt trucks, was published on Facebook here on March 18, 2020. It has been shared more than 3,800 times. 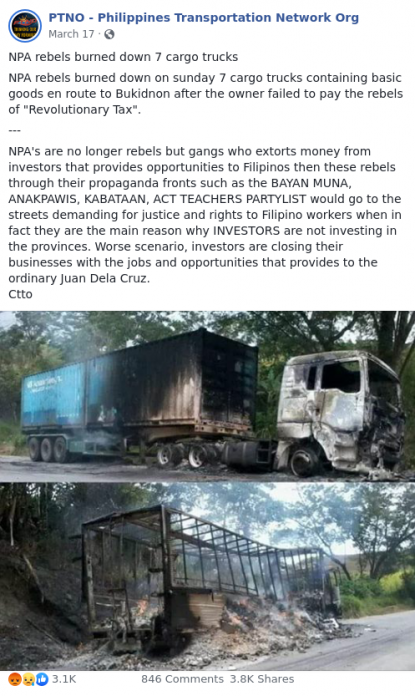 Bukidnon is a landlocked province in Mindanao, a major island in southern Philippines.

While the caption did not explicitly specify when the incident took place, comments by Facebook users suggest that the post was believed to be showing an attack that occured during the ongoing COVID-19 pandemic.

One user commented: "What kind of people are these, capable of adding chaos during this pandemic? What you've been fighting for against the goverment [sic]? You are against everything, such a selfish act!”

Another commented: "son of a b***h!! the philippines already has a big problem because of covid19 they still refuse to be restrained demons contemptible NPA it's just pure ideology for these fools!! hope you get infected of the virus"

A combined reverse image and keyword search on Google found the same image was published on Facebook here on March 10, 2015, at least five years before the COVID-19 outbreak.

The caption of the 2015 post is identical to that of the misleading posts.

Below is a screenshot of the misleading post (L) and the 2015 post (R), with publishing dates marked red by AFP: 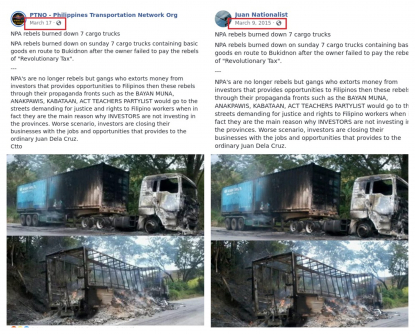 The same photos were also published in March 2015 in blog posts about NPA activity here and here.

According to several media, NPA rebels set fire to seven trucks on March 8, 2015 in an operation that targeted a military unit on the Philippines' Bukidnon province. The attacked was reported on here by GMA News, here by Mindanews and here by Sunstar.