A photo of Joe Biden circulating on social media has been shared alongside a claim that it shows him being sworn in as 46th president of the United States on a Bible with an upside-down cross. The claim is misleading: the photo was taken in 2009, when Biden was sworn in as US vice president.

“Biden swore on a Bible with an upside down cross just like all other devil's puppets (sic),” reads the caption on a Facebook post published on January 21, 2021, one day after President Biden’s inauguration.

The accompanying photo shows Biden raising his right hand, with his left hand placed on a Bible held by his wife, Dr Jill Biden. 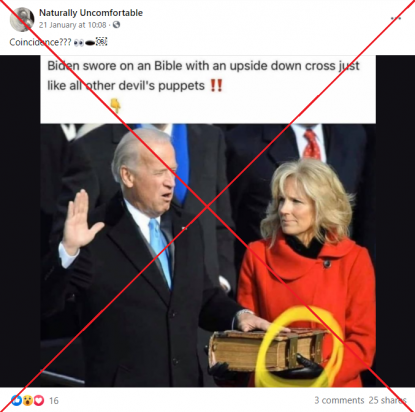 The image has circulated alongside a similar claim on social media in Chinese and Spanish, as reported by AFP’s fact-checking team in Mexico .

A reverse image search on Google and keyword searches found the photo was originally published in the archives for news agencies AFP and Reuters. The photo's captions state the image was taken during Biden’s inauguration as vice president of the United States on January 20, 2009.

The AFP caption reads: "US Vice President Joe Biden is sworn in with his wife Jill at the Capitol in Washington on January 20, 2009. AFP PHOTO/Tim SLOAN."

The photo appears to show that Jill Biden inadvertently held the Bible upside-down at the 2009 ceremony.

On January 20, 2021, Biden was sworn in as the 46th president of the United States on the same family Bible, which has accompanied him at key moments of his 50-year political career.

The 2021 photo corresponds with footage of the event, as recorded by AFP.

AFP has debunked various false claims about Biden’s inauguration, including that the executive orders he signed on his first day in office were blank and that troops snubbed him at the ceremony.