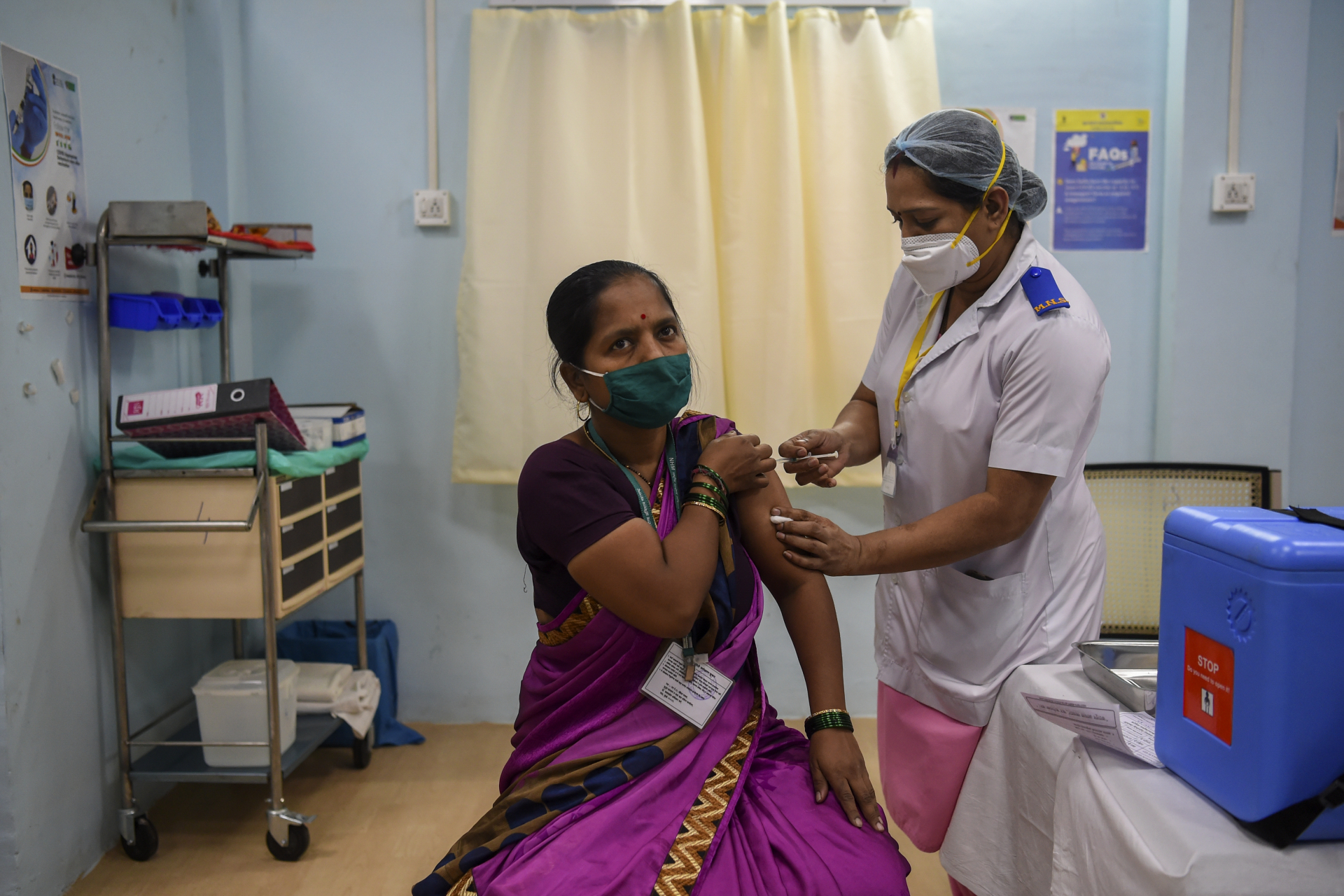 A medical worker inoculates a colleague with a Covid-19 coronavirus vaccine at the Rajawadi Hospital in Mumbai on January 19, 2021. (AFP / Punit Paranjpe)

A video has been viewed thousands of times in multiple Facebook and YouTube posts that claim it shows an Indian Muslim cleric talking about a mind-controlling microchip injected through Covid-19 vaccinations. The video was promoted online by official spokesmen for India’s ruling Bharatiya Janata Party (BJP), who mocked the cleric in their tweets. The claim that the man speaking in the video is an Indian Muslim cleric, however, is false: the video has circulated in reports about a cleric in Pakistan. Health experts have refuted the cleric's suggestions about Covid-19 vaccines.

The 56-second clip was published on Facebook here on January 4, 2020. The Hindi-language caption translates to English as: "Here is the Islamic version of India's fraudulent vaccine expert, who says there is a chip in the vaccine that will control the mind".

An Urdu-language sticker at the bottom of the video reads: “Coronavirus.”

“Jews are trying to create a vaccine with which they will be able to control your mind, you will only think what they want,” the man in the video says in Urdu. "They are trying to insert a microchip which will be then mandatory for everyone to take it through injection.”

The same video was also shared by Bharatiya Janata Party spokesmen on January 4, 2021 in tweets here and here. The text in the tweets is identical to the caption seen in the misleading Facebook post.

The video was also shared alongside a similar claim here and here on Facebook; and here on YouTube.

The claim that the man is an Indian cleric is false.

A reverse image search on Google by keyframes of the video, obtained using the digital verification tool InVID-WeVerify, found this article published by Siasat, a Pakistani news site, on June 2, 2020.

According to the article, the man in the video is Pakistani cleric Kaukab Noorani.

“Addressing worshippers at a mosque in Karachi, Kaukab Noorani said Jews are developing a vaccine for coronavirus that will control our minds,” the Urdu-language article reads.

A longer part of the video was uploaded here on YouTube on May 29, 2020. The cleric starts talking about the Covid-19 vaccine from the three-minute 14-second mark in the video. He speaks throughout the video in Urdu, which is the official language of Pakistan.

Health experts have dismissed the claim that Covid-19 vaccines contain a microchip, one of several conspiracy theories circulating as vaccination programmes roll out around the world.

Contacted by AFP, Waseem Khawaja, a doctor and spokesman for the Pakistan Institute of Medical Sciences in Islamabad said people should ignore such conspiracy theories.

“This kind of vaccine which has a mind-control chip is not in our knowledge,” he said by phone on January 19, 2021. “People should not pay heed to such social media posts and make sure to get only government-approved vaccines for Covid-19".

A spokesperson for the World Health Organization (WHO) in India told AFP: “It is not true that there are microchips in all vaccines to control people's minds".

AFP has previously debunked online hoaxes that the Covid-19 pandemic is being used as an excuse to implant microchips in humans. Two of our reports debunking the conspiracy theory can be read here and here.