This photo shows an Australian senator breastfeeding in parliament, not the country’s prime minister

A Nigerian Facebook post shared thousands of times claims to show Australia's prime minister breastfeeding while delivering a speech in parliament. While the photo does show an Australian lawmaker, she’s not the prime minister -- she’s Larissa Waters, a member of the country’s Senate.

The picture was posted by the Facebook page Ogun State on April 21 and has since been shared more than 12,000 times. We’ve archived the post here. 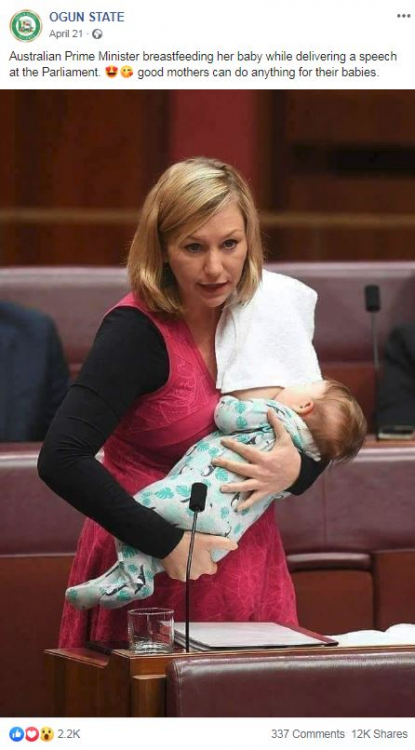 A screenshot of the Faceook post, wrongly identifying the woman as Australia's prime minister

“Australian Prime Minister breastfeeding her baby while delivering a speech at the Parliament. 😍😘good mothers can do anything for their babies,” the caption reads.

This is Julia Gillard: 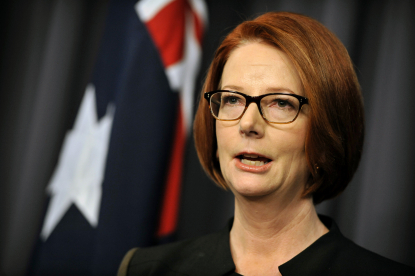 As for the woman pictured in the Facebook post, a Google reverse image search identifies her as Larissa Waters, a senator with the Australian Greens. In June 2017, Waters breastfed her 14-week-old baby in parliament while moving a motion on black lung disease, a condition affecting coal miners in the country.

First time I've had to move a Senate motion while breastfeeding! And my partner in crime moved her own motion just before mine, bless her

Here is a video of Waters moving the motion while breastfeeding.

Waters had made history the previous month by becoming the first woman to breastfeed a child in the Australian parliament, as reported here in the New York Times.

Waters received a wave of support around the world from mothers, who are often still publicly shamed for breastfeeding in public.

She is not the only female lawmaker to have breast-fed a baby in parliament. As reported by AFP, Icelandic MP Unnur Bra Konradsdottir made similar headlines in 2016, as did Spanish MP Carolina Bescansa.

This video shows Chinese soldiers at a railway station in Guangzhou, China