A photo of Pakistani Prime Minister Imran Khan standing in a line has been shared thousands of times on Facebook alongside a claim he queued like members of the public despite being the leader of the country. The claim is false; the photo of Khan has circulated online since at least 2017, before he was elected prime minister of Pakistan in August 2018.

The photo of Pakistani Prime Minister Imran Khan has been shared nearly 3,000 times in this Facebook post published on August 20, 2020.

The Urdu-language caption of the post translates as: “This man standing in a queue is not Nawaz Sharif who used to book the entire plane to go to London and America with his family with public money. This is Prime Minister of Pakistan Imran Khan. Imran Khan leaves for Karachi from Islamabad airport. See he is standing in the common people’s queue at the time of departure. This is new Pakistan. Love you Imran Khan.” 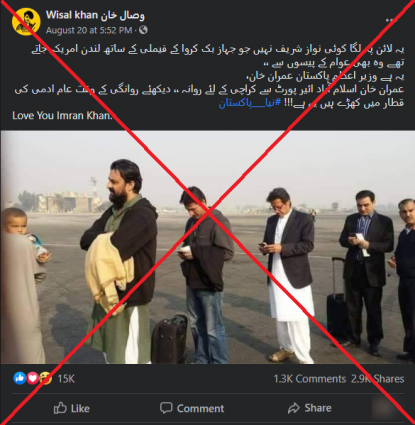 Nawaz Sharif is a former prime minister of Pakistan.

A reverse image search on Google found an earlier version of the photo posted here on Twitter on April 28, 2017.

That was published more than a year before Khan became the prime minister of Pakistan on August 18, 2018.

Who is this ???
This is Head of Biggest Political Party of Pakistan.
Koi Shak ???
Hona b Nahi Chayeia...

Proud of you @ImranKhanPTI pic.twitter.com/RpHdbzAeAE

Below is a screenshot comparison of of the April 2017 photo (L) and the image in the misleading post published in August 2020 (R): 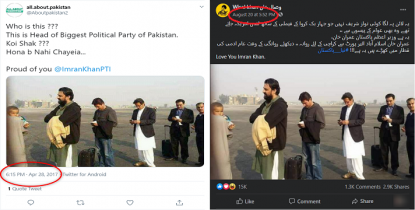