Photos of a boy covered in bruises have been shared thousands of times on Facebook and Twitter alongside a claim that he is the Muslim boy who was beaten for allegedly drinking tap water inside a Hindu temple in the Indian state of Uttar Pradesh in March 2021. The claim is false; one of the photos has circulated since October 2020 in reports about a boy who was brutally assaulted by his father in Al-Mahwit, Yemen.

The photos were published on Facebook here on March 14, 2021. 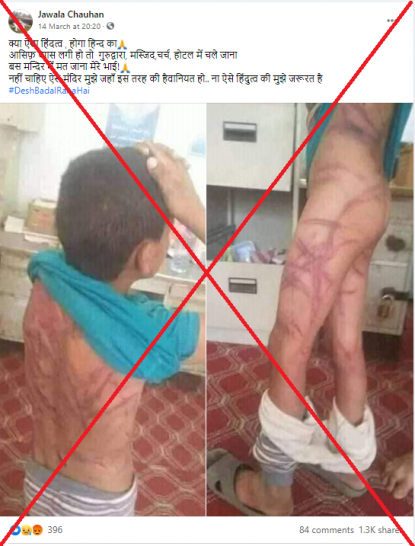 The post’s Hindi caption translates to English as: “Is the Hindutva in India going to be like this? Asif, please go to a Gurdwara [Sikh shrine], a church or a hotel if you are thirsty next time, but do not go to temple, my brother. I neither want a temple where there is such brutality nor a Hindutva like this.”

Hindutva is an ideology propagated by Hindu-hardliner groups that promotes Hindu nationalism and supremacy in India, as described in this AFP report.

The post cirulcated just days after a young Muslim boy, Asif, was assaulted for allegedly drinking water from a tap in a Hindu temple in Uttar Pradesh's Ghaziabad district on March 12, 2021, according to local news website The Logical Indian. Police confirmed the arrest of the assailents on Twitter here on March 13.

A reverse image search found that one of the photos has circulated since October 2020 in reports about a boy who was assaulted by his father in Al-Mahwit, Yemen.

The photo was published on an Arabic-language Yemeni news website here on October 5, 2020.

“The police in  Al Mahwit Governorate have arrested a 40-year-old man named Rashid Muhammad Al-Qahili for torturing his 14-year old son,” part of the report reads.

Below is a screenshot comparison the photo shared in the misleading posts (L) and the photo published on Yemeni news report (R): 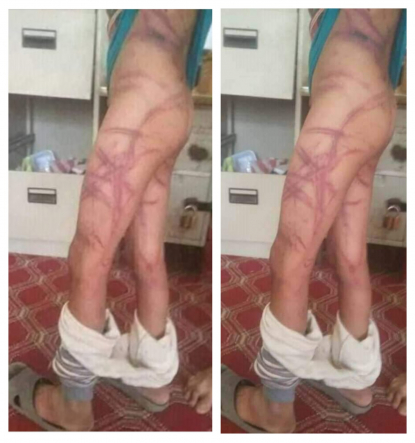 A further search found the same photo was also shared on Facebook here by a local activist on October 6, 2020. The post notes that the boy was “beaten and brutally abused by his father”.

In an Arabic-language statement seen here, the Yemeni government confirmed that the father was arrested two days after the incident.

AFP also debunked a false claim that the photos show a boy in Algeria in Arabic here.