Multiple Facebook, Twitter and TikTok posts have shared a video in March 2021, claiming it shows the World Bank has praised the Philippine government for the country’s “strong” economic performance despite the Covid-19 pandemic. The claim is misleading: the video shows a news report that has circulated online since 2019, months before the country declared its first Covid-19 infection; the Philippine economy in fact shrank to record levels during the pandemic, according to the country’s statistics agency.

The post’s Tagalog-language caption translates in English as: "Philippine tax reform programme gains admiration from the World Bank, and because of it the country’s economy is going stronger despite the pandemic.” 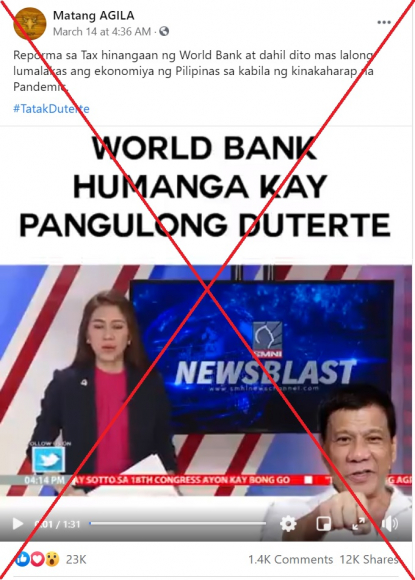 A screenshot of the misleading post, taken on March 16, 2021

The video circulated online amid surging Covid-19 infections in the Philippine capital of Manila, which prompted the government to impose targeted lockdowns and reintroduce night-time curfews.

Officials in the capital Manila, where most of the new cases are detected, have been quarantining neighbourhoods in a bid to contain infection clusters while minimising the economic impact.

Covid-19 restrictions have crippled the Philippine economy and left many people hungry and out of work, AFP reported.

“Tax reform” refers to the law President Rodrigo Duterte signed in December 2017 which aimed to raise funds for his massive spending programme for new roads, railways, ports and airports.

Comments to the video indicate some people had believed the news report is recent.

“This government has enacted projects despite the pandemic where previously it’s all corruption, even the World Bank admires President Duterte,” one comment reads.

The claim, however, is misleading: the video is in fact unrelated to the pandemic and has circulated online some seven months before Covid-19 was first detected in the Philippines.

A keyword search on Google found the video was posted here on Facebook by local television SMNI News on June 7, 2019. 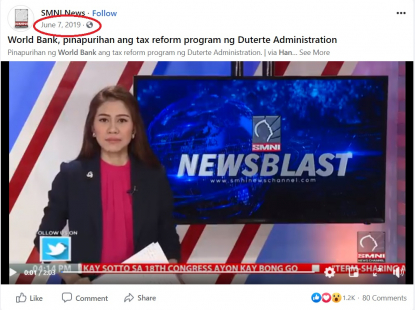 A screenshot of the SMNI News report with the posting date circled in red by AFP.

The first Covid-19 case in the Philippines was confirmed in January 2020.

The claim that the Philippine economy is “going stronger despite the pandemic” is also misleading.

Figures from the Philippine Statistics Authority, the country’s statistics agency, show the economy shrank a record 9.5 percent in 2020.

The figure was the worst since records began in 1946, ending more than two decades of annual growth, AFP reported.