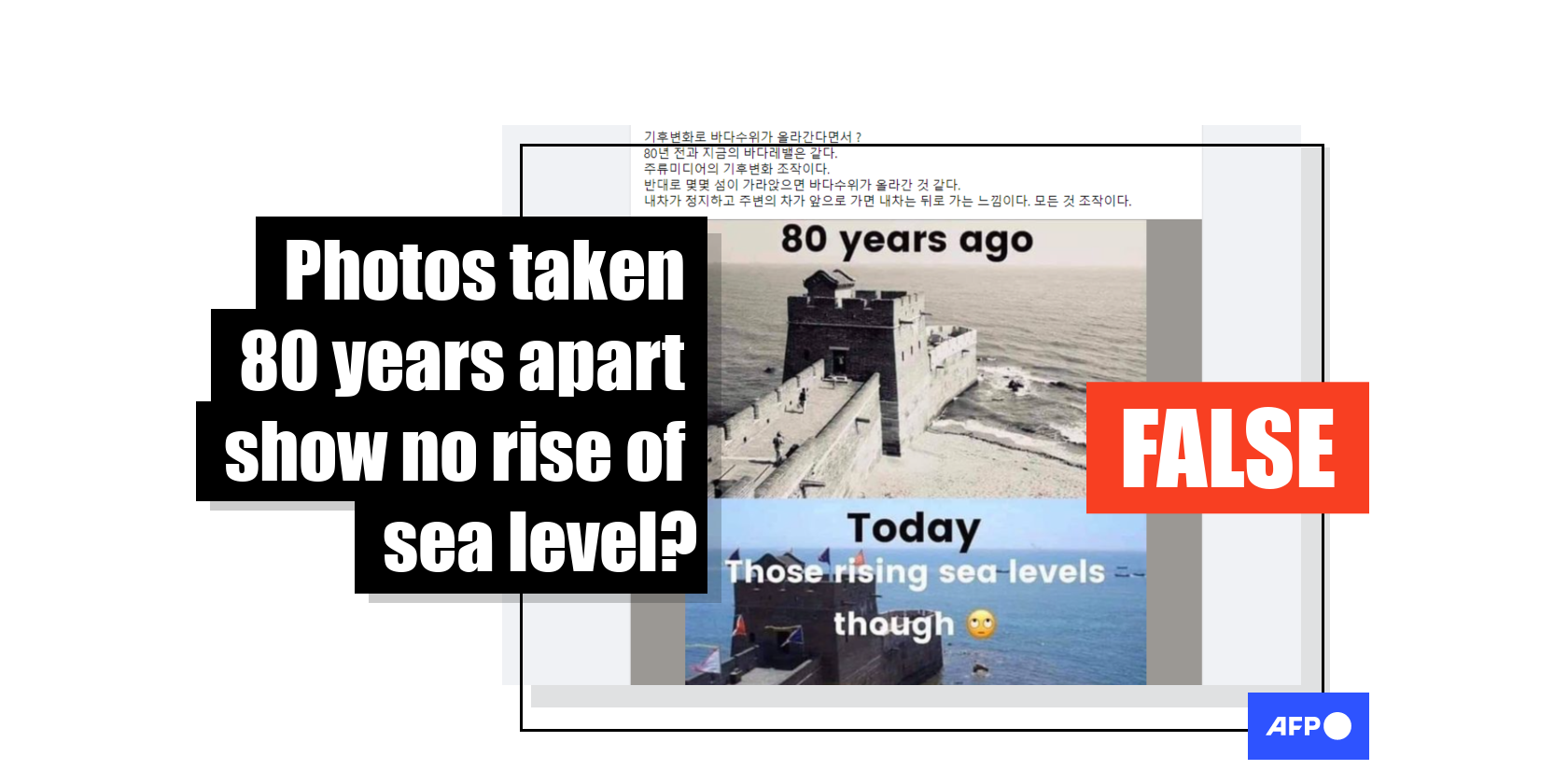 One of the photos was taken in 2008, not eight decades ago

A photo collage has been shared repeatedly on Facebook and Twitter alongside a claim that the two photos were taken 80 years apart and show there has been no rise of the sea level. However, the claim is false: the first image was taken in 2008 and has been digitally doctored to appear older, while the second photo was taken sometime between 1987 and 2012. As of the end of 2019, the global mean sea level was 87.6 millimetres above the 1993 average, according to the U.S. National Oceanic and Atmospheric Administration (NOAA).

The photos and the claim were shared here on Facebook on March 12, 2021. 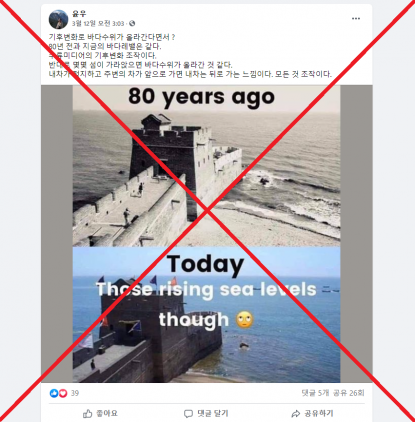 Part of the Korean-language claim translates to English as: “[They] claim sea levels would rise due to climate change.

“The sea level is the same 80 years ago and now.
This is a climate change hoax fabricated by the mainstream media.”

The English-language text superimposed on the top, black-and-white image reads: “80 years ago”, while the bottom, colored image has text that says: “Today” and  “Those rising sea levels though ?”.

The same photo colleage has been shared alongside a similar claim on Facebook here, here and here; and on Twitter here.

Both images show the easternmost section of the Great Wall of China, known as the Laolongtou, or Old Dragon’s Head, which juts out into the Bohai Sea. The landmark is located in the district of Shanhaiguan of the city of Qinhuangdao in Hubei Province, China.

The first photo, in black and white, claiming to be from 80 years ago, was in fact taken on September 15, 2008, at Shanhaiguan, as seen here on photo-sharing site Flickr.

Below is a screenshot of the photo on the Flickr website, with the date and location circled in red by AFP: 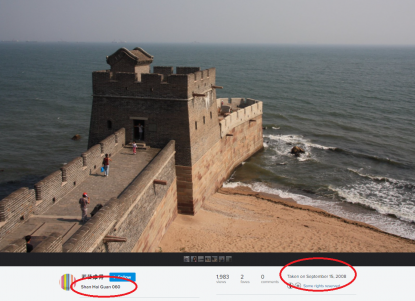 The image appears to have been digitally altered to remove its colour.

A comparison of the motions of the waves and the people captured in the photo indicate the top image in the misleading post and the Flickr photo are the same.

Screenshot comparison of the photo in the misleading post (L) and the photo on Flickr (R), with the matching features circled in red by AFP:

A reverse image search on Google found the second image from “today” was published on a website promoting travel to the Great Wall, which was copyrighted in 2012.

According to the website, the Laolongtou wall was built during China’s Ming dynasty but was almost completely destroyed in 1900. The wall was subsequently restored “84 years” after its destruction, the website says.

Travelchinaguide.com, an online tour operator in China, says on its website that the “Estuary Stone Great Wall”, the portion of the Laolongtou wall that corresponds to the point depicted in the image in question, was “renovated in 1987”.

Climate.gov, a website run by the U.S. National Oceanic and Atmospheric Administration (NOAA), says the global mean sea level has risen about 21 to 24 centimetres since 1880.

The Korea Meteorological Administration, South Korea’s national weather service, also says on its website that melting glaciers and ice sheets are likely to have caused sea levels across the globe to rise by 0.16 metres between 1902 and 2010.