A graphic that appears to show that Sourav Ganguly, a former Indian cricketer, has joined India's ruling Bharatiya Janata Party (BJP) has been shared in multiple posts on Facebook. The claim is false: the image was created by superimposing an old photo of Ganguly in an advertisement for incense sticks onto a background of BJP branding. 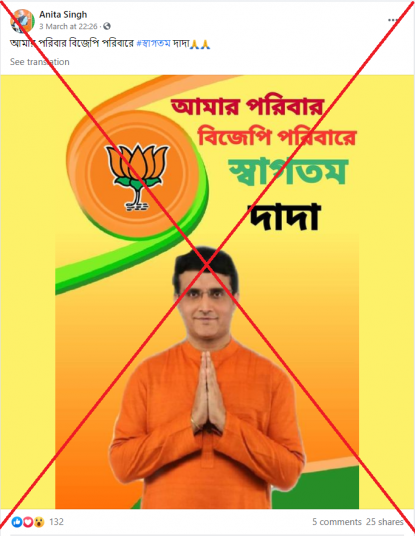 The image shows Ganguly, who is now the president of the Board of Control for Cricket in India, posing in front of the BJP lotus symbol.

The Facebook post’s Bengali-language caption, which is also superimposed in the graphic image, translates to English as: “Welcome to my BJP family, dada".

The posts circulated ahead of an upcoming assembly election in India's West Bengal, Ganguly’s home state, as AFP has reported here.

A reverse image search found that the photo of Ganguly used in the misleading graphic has been taken from an old advertisement campaign for incense sticks.

The advert was published here on the Pinterest page of the company, Cycle Rhythm Agarbathies. Cycle Rhythm Agarbathies published another video from the promotional campaign on YouTube here on September 5, 2016.

A Google search also found no credible media report or official statement suggesting that Ganguly has joined the BJP.

In fact, the India's Hindustan Times newspaper reported on March 4, 2021, that Dilip Ghosh, the BJP’s chief in West Bengal, had “no idea” about Ganguly joining the party, which was speculated on ahead of a rally on March 7, 2021.