This photo circulated in a report about rotten meat and not the risks of tuberculosis, which proper cooking removes

A photo of raw meat covered in white spots is being shared on social media alongside a warning that the blemishes are “white bubbles" that contain the "TB virus." This claim is misleading; the photo has previously circulated online in a report about rotten meat; experts say properly cooking meat eliminates the threat of tuberculosis and that TB bacteria in animals is most commonly transmitted to people through unpasteurised milk.

The image, which has superimposed red arrows pointing to the white spots on the meat, was posted alongside the following claim: “Dear buyer of Meat / If you see these white bubbles, they are bags containing deadly and dangerous TB virus. Help on spreading the word.” 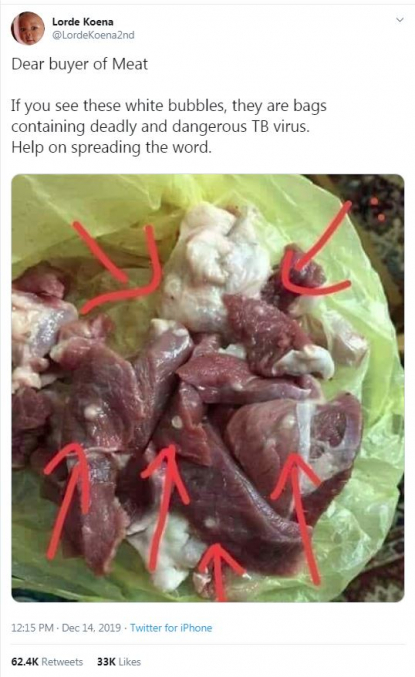 The same photo was posted alongside a similar claim on Facebook here.

However, the claim is misleading; experts say that proper preparation of meat eliminates the risk of TB infections and that the strain of bacteria that cause TB in animals is most commonly transmitted to people through the consumption of dairy products that have not been heat-treated.

“Properly cooked meat doesn’t pose a risk for TB infection,” Thomas Dale Hiatt, a technical officer for tuberculosis at the World Health Organization (WHO), told AFP in an email on January 7, 2020.

"That should be the approach people should take to keep them safe.”

Two species of bacteria, Mycobacterium tuberculosis and M. bovis, cause TB in humans, according to this report by the WHO and several other international health groups.

“The main route of transmission of M. bovis to people is indirect,” the report notes. “It is most commonly transmitted through the consumption of contaminated milk and other dairy products that have not been heat-treated. Less commonly, it can be transmitted through the consumption of raw or improperly cooked contaminated meat.”

The photo featured in the misleading posts has previously circulated online in a report about rotten meat, not TB. A reverse image search found a version of the photo posted without the red arrows here on the Arabic-language website El Balad News. 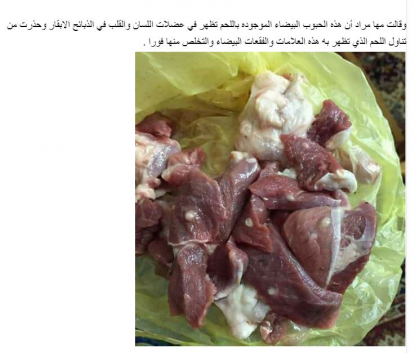 The headline of the report reads: “Rotten meat photos scares women on Facebook”.

Part of the report, when translated to English, cites a veterinarian who said that the white spots seen on the meat are in fact “Pinworm (Enterobius vermicularis) egg bags.”