This footage has been taken from a video game

A video has been viewed thousands of times in Facebook and Twitter posts that claim it is aerial footage of a US drone strike killing a top Iranian military commander General Qassem Soleimani "in Iran". The claim is false; the footage is actually from a military simulation video game; Soleimani was killed on January 3, 2020 by a US strike in Baghdad, Iraq.

The video was shared in this Facebook post on January 6, 2020. The one-minute and 40-second long clip appears to show military thermal imagery of a missile strike on a convoy. 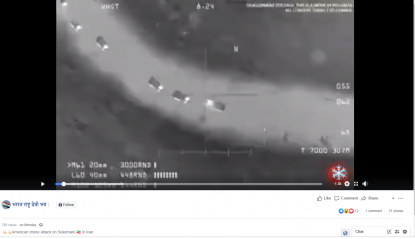 But the claim is false; a reverse image search using keyframes from the video found that the footage is actually from a military simulation video game called AC-130 Gunship Simulator: Special Ops Squadron.

The footage was posted on YouTube here on May 25, 2015, on a video gaming channel Byte Conveyor Studios with a title: ‘AC-130 Gunship Simulator- Convoy Engagement’.

The caption of the YouTube video, which has over 5.8 million views, reads: “Development preview of our upcoming game for mobile platforms, ‘AC-130 Gunship Simulator: Special Ops Squadron’. Voted TOP 50 2014 App of the Year at SlideDB.”

Below are screenshot comparisons from the misleading video (L) and the video game footage from YouTube (R): 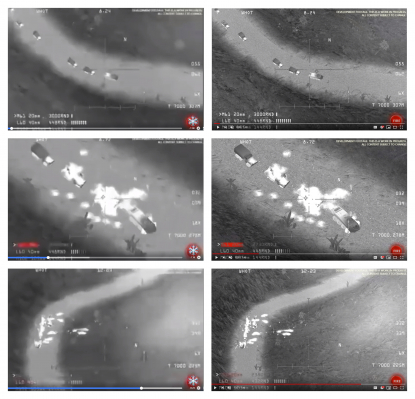 Another longer version of the video game footage was published on YouTube here on May 13, 2015.

Soleimani was killed by a US drone strike in Baghdad, Iraq -- not in Iran as the misleading Facebook post claims. AFP’s report on the attack can be seen here.

This photo circulated in a report about rotten meat and not the risks of tuberculosis, which proper cooking removes