A photo of military vehicles firing an artillery barrage has been shared thousands of times in multiple posts on Facebook alongside a Tagalog-language caption warning Filipinos about Iran’s attack on US military bases in Iraq. The photo has been shared in a misleading context; it is actually an Associated Press photo that was taken in 2000 of a Russian military campaign in Chechnya.

The photo was shared here on Facebook on January 8, 2020 -- the same day that Iran launched missiles at two airbases in Iraq that host US troops.

Below is a screenshot of the misleading post, which has been shared more than 5,000 times: 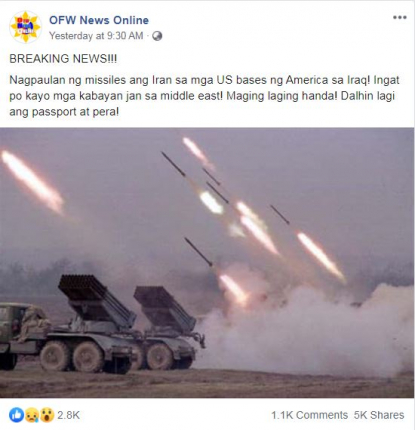 The same photo has also been shared in other Facebook posts here and here with a similar warning.

The photo has been shared in a misleading context; it is actually an Associated Press photo of a Russian military offensive against rebels in Chechnya in 2000.

Below is a screenshot comparison of the photo in the misleading posts (L) and the AP photo (R):

Footage from Iranian state TV of the actual January 8 missile strike on the Ain al-Asad airbase can be seen here on AFP’s Youtube page.

Following the missile strike, the Philippine government tasked its embassy in Baghdad with effecting the mandatory evacuation of some 1,640 Filipinos in Iraq, according to this government advisory.

No, Ondo State in southwestern Nigeria has not reduced its debt by 50% in the past three years.

This footage has been taken from a video game