A photo of a crashed helicopter has been shared in a Facebook post alongside a claim that a US helicopter was shot down over the Iraqi-Syrian border in January 2020. The claim adds that four Americans and a pilot were killed. However, the claim is false and the photo is being used out of context. The photo has circulated since 2003 in reports about a US army helicopter crash in Iraq; the US government also said there were no US casualties in Iraq after a recent missile attack on two military facilities.

The post’s caption states: “Breaking news
4 Americans and a pilot were killed. A helicopter was attacked by a missile near the Iraqi-Syrian border to the Islamic resistance in Iraq.” 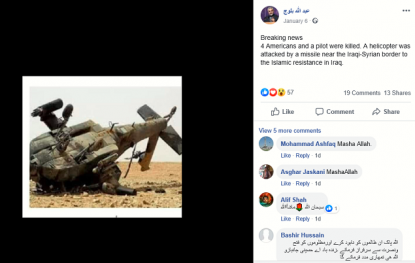 Iran did fire several missiles at two Iraqi airbases where US and coalition forces were based on January 8, 2020, officials in Washington and Tehran said. Here is an AFP report on the attack.

However, the claim in the misleading post is false.

A reverse image search on Google followed by a keyword search found the same photo published here by the U.S. National Archives, which notes the picture was taken in 2003.

Below is a screenshot of the photo on the U.S. National Archives website: 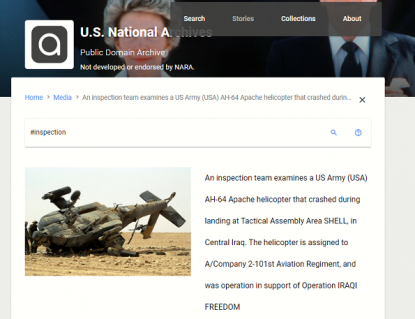 A screenshot of the photo on the U.S. National Archives website

The photo's caption states: “An inspection team examines a US Army (USA) AH-64 Apache helicopter that crashed during landing at Tactical Assembly Area SHELL, in Central Iraq. The helicopter is assigned to A/Company 2-101st Aviation Regiment, and was operation in support of Operation IRAQI FREEDOM."

The photo is dated March 30, 2003 and is credited to Sgt. Igor Paustovski, a US military cameraman.

Another reverse image search found the same photo was published in this Foreign Policy magazine article in April 2015.

Below is a screenshot of the photo in the story: 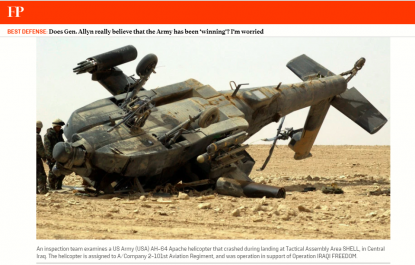 Screenshot of the crashed helicopter photo in Foreign Policy article

The photo’s caption is the same as that listed by the U.S. National Archives.

The US Department of Defense also confirmed that there were no causalities in the Iranian missile strikes.

"Most importantly, no casualties, no friendly causalities, whether they are U.S., coalition, contractor, et cetera," US Secretary of Defense Mark Esper said in a press briefing on January 8, 2020.

This US State Department report from January 8, 2020 also confirmed that there were no military casualties for the US or its allies in Iraq.