Posts claiming to show a church destroyed by the Ethiopian government during the recent conflict in the Tigray region have been shared multiple times on Facebook and Twitter. The claim is misleading; the church depicted in the images was destroyed in battle by Ethiopian forces, but more than 20 years ago.

“They destroyed our church. They killed our priests and religious fathers. But they can’t take our spirit. We are still at Church,” reads a February 14, 2021, tweet which included the hashtag #TigrayGenocide. 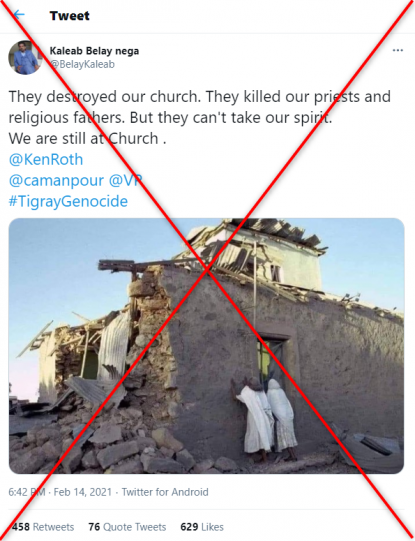 The image in the tweet shows two women dressed in white with their hands pressed against the remains of a ruined building.

Fighting broke out between Ethiopia and the ruling faction in the country’s Tigray region in November 2020 and continues today, causing thousands of deaths, and the massive displacement of people and destruction of property, as AFP reported here, here and here.

A similar tweet, this time referencing Ethiopian Prime Minister Abiy Ahmed and, again, the ongoing conflict in Tigray, was posted here on the same day.

Finally, a Facebook post, also published on February 14, 2021, shared the same image, but without saying when it was taken.

“Christian Mothers praying on their destroyed church in Eritrea. The Churches are destroyed by the Ethiopian and Eritrean government. Please pray for them,” reads the Facebook post. 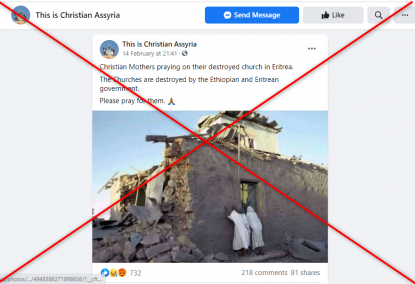 The image, however, is unrelated to the fighting that erupted in Tigray, in the north of Ethiopia, last year and is, in fact, more than two decades old.

A reverse image search on Google revealed it was posted on social media in 2018, a year before the current conflict began. A search on Bing indicated that the church was located in Adi Keih, a market town in Eritrea just north of Tigray, across the border.

A Google search for “church destroyed in Adi Keih” came up with news reports (here and here ) published on April 16, 1999, detailing how Ethiopia had bombed a rural town in Eritrea and damaged a church.

At the time, the two countries were locked in a war over their border that was not clearly delineated when Eritrea gained independence from Ethiopia in 1993.

This video by the Reuters news agency, published on April 15, 1999, showed a church that was bombed during combat.

A February 18, 2021 screenshot of the video as it appears on Reuters website

A visual comparison of the photo posted on social media and a screenshot from the Reuters video shows that it is the same building.

On November 4, 2020, Ethiopian Prime Minister Abiy Ahmed launched a military offensive against the ruling party in Tigray, accusing it of attacking a government military base and trying to steal artillery and other weapons in a bid to destabilise the country. At one point the conflict spilled over into Eritrea.