Skip to main content
Ash and burnt trees remain after the passage of the Santiam Fire in Gates, Oregon, on September 10, 2020 (AFP / Kathryn Elsesser)

Social media posts shared in English and Spanish claim to show an image from the 2020 wildfires on the West Coast of the United States. This is false; the photo was taken 20 years earlier in Montana.

The image shows two elk taking refuge in a body of water from a raging forest fire with the text “Pray for Oregon” -- one of the states hit hard by the unprecedented wildfires.

The posts have been circulating on Facebook since at least September 9, 2020 and more examples are available here, here, and here. 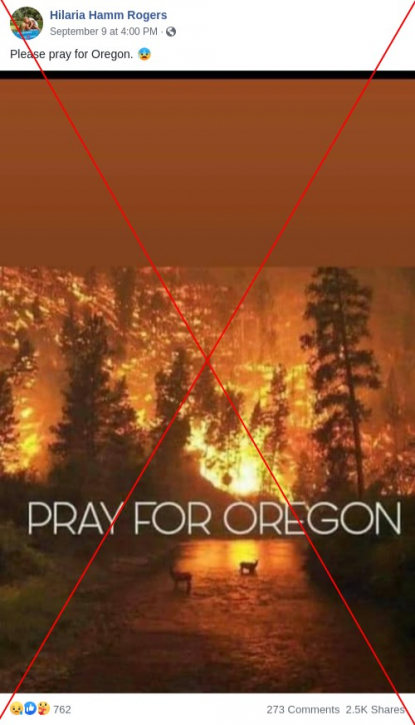 The post is also in Spanish here and here.

Fires up and down the US West Coast have burned more than five million acres, an area roughly the size of the state of New Jersey, and the disaster has brought the issue of global warming to the forefront of the US presidential campaign.

The image of the forest fire also circulated erroneously in 2019 during fires in the Amazon rainforest. At that time, AFP Factual conducted a reverse image search of the content and found that the original photo was taken in Sula, Montana on August 6, 2000 by John McColgan, a wildfire expert working with the US Bureau of Land Management.

The photo was selected by Time magazine as one of the most compelling photos of the year for 2000.