A parody social media account in Nigeria has been spreading confusion and panic among mobile phone users as they face new government regulations. A Twitter account pretending to represent the authorities responsible for implementing the policy changes published a series of false claims including fake deadlines. Officials have dismissed the posts as a hoax and AFP Fact Check traced the hoax account to an existing Twitter user who changed their handle.

As of this year, mobile users in Africa's most populous nation will be required to link their phone lines to their national identification number (NIN) – a unique 11-digit number issued to all Nigerian citizens and legal residents  – or risk disconnection.

The Nigerian Communications Commission (NCC) originally gave mobile subscribers until the end of December to make the changes.

The influx of people crowding enrollment centres to obtain their NINs amid the coronavirus pandemic has proved a difficult task for the National Identity Management Commission (NIMC), which has seen some of its workers go on strike. More than 114,000 Nigerians of the 200-million population have been infected with Covid-19. 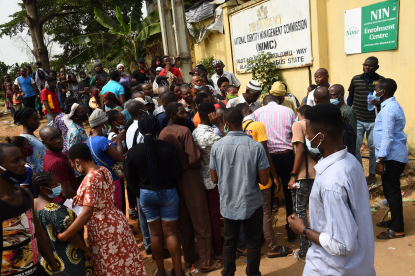 A crowd at one of the enrollment centres in Lagos on December 30, 2020 (Photo: PIUS UTOMI EKPEI / AFP)

Tapping into people's fears of missing the deadline, a Twitter account claiming to belong to the NIMC started publishing false claims about the registration process.

“You MUST complete your NIMC registration today,” reads a tweet published on January 19, 2021, by an account called @NlMC_ng.

While the user's bio states that it is a parody account, the tweet was shared more than 5,000 times, with many people expressing worry that they could no longer enrol for NINs and would see their phone lines blocked.

Another tweet published on the same day by the account reads: “By order of the federal government, today is given as the last chance to register your NIMC or face the wrath of what comes next”.

This tweet was shared more than 6,000 times and quoted in a story by Nigerian daily newspaper The Punch and Nairaland, Nigeria’s most-visited domestic social network. Although Punch’s article has since been deleted, we’ve archived a Google cached version here.

The NIMC has rejected the tweets and account as a hoax.

People can still register for identity numbers, according to statements issued by both the NIMC and the NCC.

Nigeria’s Communications Minister Isa Ali Ibrahim Pantami also warned that the claims were false. “The deadline for those without NIN is not today, but 9th of February as announced by the NCC,” Pantami wrote in a tweet on January 19, 2021. “The process continues pls (sic).”

@nimc_ng. Beware of fraudsters, pls.
Furthermore, the deadline for those without NIN is not today, but 9th of February as announced by the NCC. The process continues pls https://t.co/4UrkkYEt7T

AFP Fact Check has not found any reports of mobile phone lines being cut since the January 19 deadline passed. However, a telecommunications firm warned customers on January 21, 2021, to link their phones to their ID numbers “to avoid the line from being blocked.”

AFP Fact Check found that the real NIMC Twitter account has been active since 2012, while the parody version was registered in 2020 and features an “l” in “NlMC” instead of a capital “i”.

The account was originally set up for @EvansT3d but the handle was then changed to @NlMC_ng.

A comparison of the account with an older version saved on archiving platform Wayback Machine revealed that the number of followers grew by almost half a day after the false claim was tweeted. 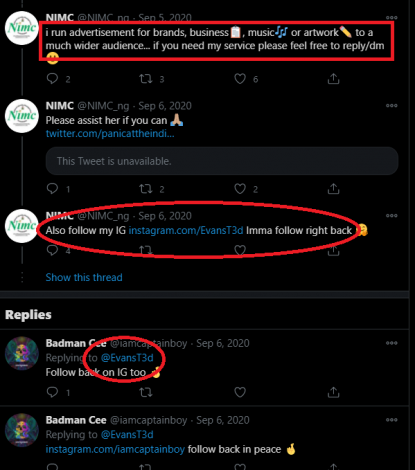 AFP Fact Check found that yet another NIMC lookalike account, called @NigeriaNimc, was created on January 19, 2021, according to Twitter Join Date, an online platform that shows the date a user joined the platform. Twitter has since restricted the account for "unusual activity".

AFP Fact Check has debunked several online accounts registered on behalf of the Nigeria Centre for Disease Control (NCDC) during the outbreak of Covid-19.

More fact checks about hoax accounts and online scams can be found here, here and here.