A raft of social media accounts falsely purporting to belong to the Nigerian president’s chief of staff Ibrahim Gambari have sprouted online since his appointment in May 2020. AFP Fact Check has rounded up some of the most popular ones, which the presidency has confirmed as being fake.

Gambari replaced powerful aide Abba Kyari on May 12, 2020, after he died of COVID-19 last month. Since his appointment, various social media accounts including this one on Facebook have sprung up to impersonate the university don. 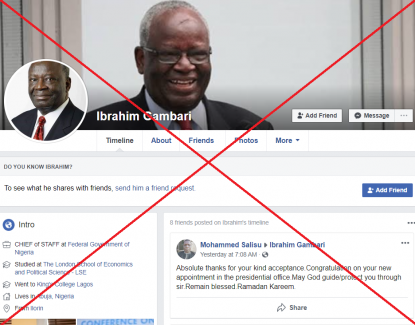 Gambari served as foreign minister in the 1980s when President Muhammadu Buhari was Nigeria's military ruler. The senior official later went on to become a UN under-secretary general for Africa during Kofi Annan's tenure.

The Facebook account displays Gambari’s picture just like 11 others found by AFP on the social network. The majority of them claim they belong to Buhari’s "chief of staff". We’ve archived some here, here, and here. 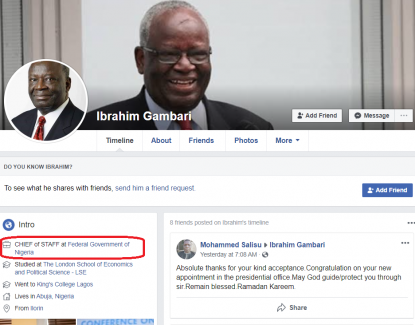 A screenshot taken on May 15, 2020, showing the misleading caption

The creation of fake social media accounts for public figures and government bodies is common in Nigeria. AFP has debunked several online accounts registered on behalf of the Nigeria Centre for Disease Control (NCDC) during the novel coronavirus pandemic. NCDC is the national health institute tasked with the control of disease outbreaks in the country.

The proliferation of fake social media accounts linked to Gambari has also spread to Twitter. AFP found that accounts @ProfSgf and @profgambarii were registered following his appointment in May. 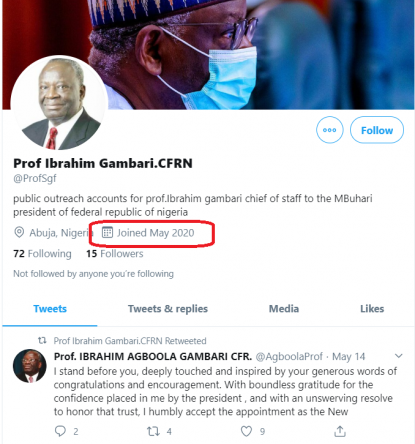 A screenshot taken on May 15, 2020, showing the account’s creation date

Using Twitter Join Date, an online platform that helps users find the actual date they became members, AFP confirmed that the account @profgambarii was created on May 12, 2020 -- shortly after unconfirmed reports of Gambari’s appointment filtered out. 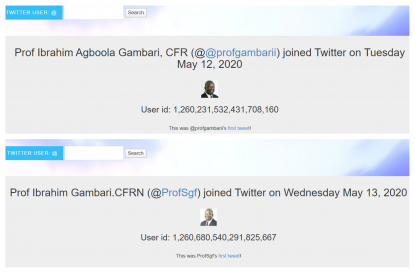 A screenshot taken on May 15, 2020, showing the dates the accounts were created

Ibrahim Gambari is the new Chief of Staff to President @MBuhari. He succeeds Abba Kyari, who passed away on April 17, 2020. pic.twitter.com/3KLK3AYOew

Gambari has no social media accounts

Buhari’s media aide Bashir Ahmad confirmed the proliferating accounts were “fake” and that Gambari had no social media presence.

DISCLAIMER: All the twitter accounts bearing Professor Ibrahim Gambari, the Chief of Staff to President @MBuhari are fake, the new CoS doesn’t have an account on twitter or on any social media platform. If he wishes to have one, it will be communicated properly.

Some of the Twitter accounts have disclaimers on their bios. This one says it’s an “official parody account” while another describes itself as a “fake account run by Eric Hover”. 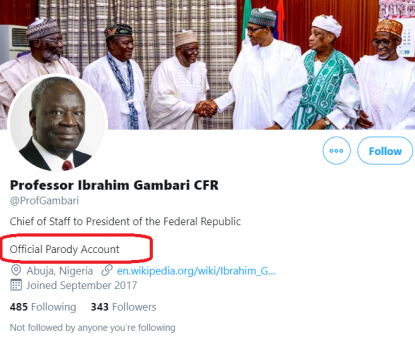 While this Facebook account has now been deleted, others seen here, here and here have remained active since Gambari’s appointment.