Skip to main content
Pumps dredge sand to reclaim land just outside a port of a Chinese-funded 1.4 billion USD reclamation project in Colombo on October 25, 2017. - Half of the reclamation project to build Colombo Financial City, previously known as Colombo Port City, has been completed, with Sri Lanka hoping to turn it into an international financial centre with special laws protecting foreign investment. (Photo by ISHARA S. KODIKARA / AFP)

Facebook users in Sri Lanka have shared an image that they claim shows opposition legislators not voting against a controversial bill allowing a China-funded infrastructure project to move forward. The claim is false: the image was taken from a live broadcast of the parliamentary proceedings before the legislators had cast their votes; the full video shows them voting against the passage of the bill.

It purports to show a tally of votes for a piece of legislation that clears a hurdle for the China-funded Colombo Port City infrastructure project to operate.

Opposition lawmakers Sajith Premadasa, Lakshman Kiriella and Tissa Attanayake -- who have criticised the bill in public -- are purportedly shown to have supported passage of the bill as they have “not voted” against it. 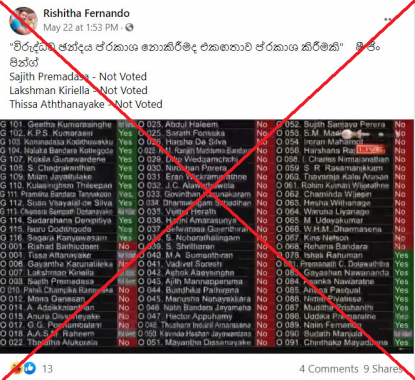 The port city is a $1.4 billion infrastructure project funded by Beijing. Officials hope it will attract offshore services similar to Dubai and Singapore, AFP has reported.

An identical image was shared alongside a similar claim on Facebook here, here and here.

But the claim is false: Premadasa, Kiriella and Attanayake all voted against the bill.

Keyword searches found the Parliament of Sri Lanka broadcast the voting proceedings live on Facebook here on May 20, 2021.

The image in the misleading posts corresponds to the video’s 1:53:13 mark when the opposition lawmakers had not yet cast their votes.

But at the video’s 3:25:56 mark when all lawmakers had voted, the tally shows Premadasa, Kiriella and Attanayake voted against the bill.

The voting status of the parliamentarians BEFORE (L) and AFTER (R) the voting concluded.

This report aired on May 21, 2021 by local television NewsFirst also shows a tally of votes of members of parliament, with the opposition lawmakers seen voting against the bill.