A video has been viewed thousands of times in Facebook and YouTube posts which claim it shows Chinese People's Liberation Army (PLA) soldiers in Hong Kong  "capturing" protesters who broke into a military garrison. The claim is false; the video has circulated online since at least 2012 and actually shows a training exercise by South Korean riot police.

The video has been posted repeatedly on Facebook, for example here on July 25, 2019 where it has been viewed more than 3,500 times.

The 3 minute 56 second video shows a large number of uniformed police or soldiers working in close formation to break up an apparent protest by a group of flag-waving people.

The Chinese language caption of the post says: “The garrison forces in Hong Kong captured the mob who rushed into a military camp with Han Xin’s method of numbering soldiers. So enjoyable and interesting! One can hardly observe the use of military tactics in their lifetime!”

Han Xin was a Chinese military general in the 2nd century BC.

The misleading post appeared online the day after China said on July 24, 2019 that its army could be deployed in Hong Kong if city authorities requested support in maintaining "public order". Here is an AFP report on the issue. 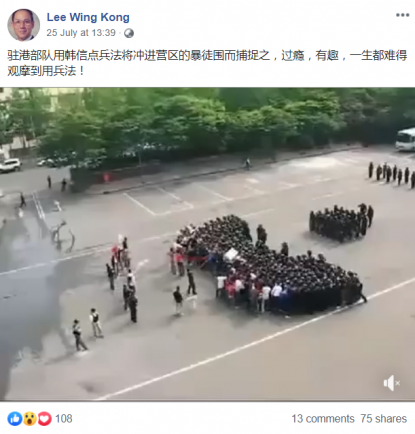 The video has been shared repeatedly online, for example here and here on Facebook, and here with a similar claim that the Chinese military has taken over key government offices in Hong Kong.

The claims are all false; the footage has circulated online since at least 2012 and actually shows a South Korean riot police training exercise.

Below are three sets of screenshot comparison between keyframes of the misleading Facebook video (L) and the video in the 2014 Daily Express news article (R): 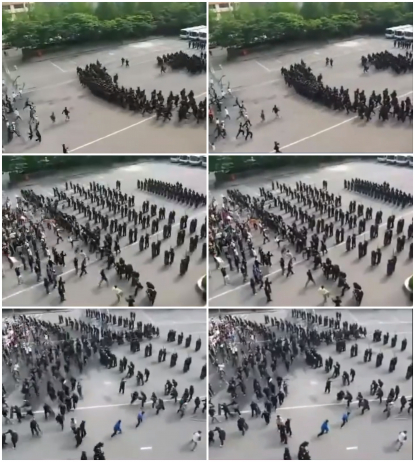 The Daily Express article says in part: “The tight formations of South Korean riot police have led some to claim they are inspired by the ancient military techniques of Spartan and Roman warriors.

“The video – originally posted in 2011 – may serve as a lesson to French police as they battle back football fanatics across the country.”

This and this YouTube videos, both containing longer versions than the misleading footage, were posted online in 2015 and 2016.

The similar videos were also posted online in 2012 in multiple Korean language YouTube posts, for example here, here and here.

One of the posts, headlined "training exercise" in Korean, is embedded below:

Those in "their uniform and those who look like civilians are all police officers," the division told AFP, adding that the footage showed a special training for "public protests in case violence breaks out".

The division said the video was made a "quite long time ago", as officers in the South no longer use gas barrels -- as seen in the video -- for this type of training.