Posts viewed thousands of times on Facebook and YouTube claim to show citizens of Benin attacking the country’s Nigerian embassy over Nigeria’s decision to shut its land borders to goods traded with its neighbours. This is false; AFP found that the video does show an attack on a Nigerian embassy, but it was in Dakar, Senegal in 2013 -- not Cotonou, Benin in 2019.

One version of the video, shared more than 4,800 times on Facebook, and seen by over 93,000 people, is captioned: “Beninours attack Nigeria embassy in Benin republic over border closure by Nigerian government”. The same claim and video was also shared on YouTube. This video, seen nearly 2,000 times, claims to show the “Nigerian Embassy under attack in Benin Republic over border closure”.

The same video was shared by other Facebook users, also claiming to show an attack on the Nigerian embassy in Cotonou in Benin Republic. We archived some of those videos here, here, here, and here. 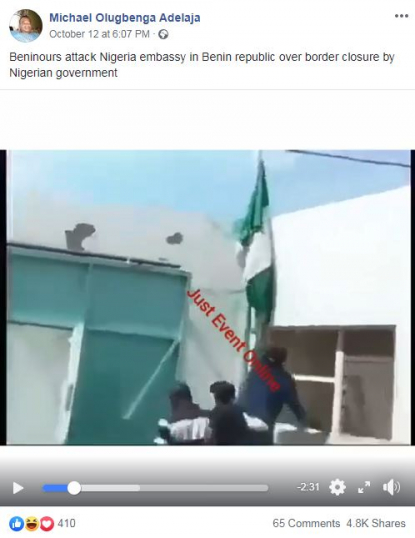 Screenshot taken on October 22, 2019, of a Facebook post claiming to show an attack on the Nigerian embassy in Benin

The Nigerian government announced a partial closure of its land borders in August 2019 in a bid to halt smuggling of rice, petrol, and other goods. The closure affects Benin, Cameroon, Chad and Niger.

As reported by AFP, President Muhammadu Buhari’s office said the restrictions on cross-border trade would "allow Nigeria’s security forces to develop a strategy" to combat smuggling, which it called a "dangerous trend".

AFP also reported that the move has especially affected Benin, and cast a shadow over the newly-signed Africa Continental Free Trade Agreement which aims to reduce tariffs and other trade barriers in the region.

Does the video show an attack on the Nigerian embassy in Benin?

Nigeria’s Ambassador to the Republic of Benin, Kayode Oguntuase, told News Agency of Nigeria (NAN) in a statement that there had been no attack at the Nigerian embassy in Cotonou.

“The embassy of Nigeria in Cotonou was never attacked and the embassy is not under any form of attack,” he said, adding that his office had been "inundated with telephone calls" about the alleged attack.

We analysed the video with the INVID verification tool and found that it had been uploaded to a Facebook page created only in April 2019 called Nicepec. The page had uploaded the video on October 2, 2019 -- showing that it had been shot earlier than when it began circulating in Nigeria from October 12, 2019.

We searched Google for frames of the video and found a few YouTube videos dating from more than four years ago.

The earliest version of the video was from March 2013. The video shows an attack on the Nigerian embassy in Dakar. It was reported in the local media in Nigeria at the time, and discussed in the Nigerian house of representatives in Abuja.

Katyen Jackden, the Nigerian ambassador to Senegal at the time, said the attack on the embassy followed a killing and the disappearance of a body from a morgue in Senegal.