A photo of a Hong Kong skyscraper apparently lit up with a pro-democracy slogan has been shared repeatedly in multiple posts on Twitter, Instagram and Facebook. The posts claim Li Ka-shing authorised the slogan's projection onto the building, where the property tycoon's CK Hutchison Holdings is based. The claim is false; the image has been doctored to include the slogan; a spokesperson for the company said the photo was a “hoax”.

The doctored image was published here on Twitter on October 18, 2019, where it was retweeted more than 170 times before it was deleted. 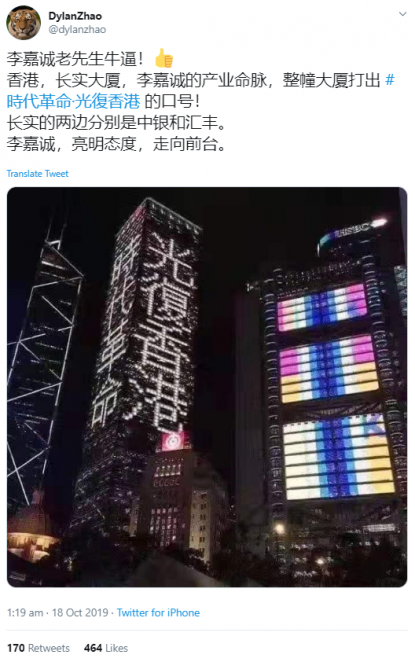 The image shows three buildings in the Central district of Hong Kong -- the Bank of China, Cheung Kong Center, and HSBC Building.

Cheung Kong Center has served as a headquarters for Hong Kong property tycoon Li Ka-shing. The now-retired businessman is a senior advisor for CK Hutchison Holdings, which is based in the Cheung Kong Center. His son Victor is the company's Chairman and Group Co-Managing Director according to the company's list of directors.

In the doctored image, traditional Chinese characters on the side of the Cheung Kong Center translate to English as “Liberate Hong Kong, the revolution of our times”.

“Liberate Hong Kong, revolution of our times” is a slogan first used by jailed pro-democracy activist Edward Leung Tin-kei as part of his campaign for Legislative Council by-elections in 2016. It was subsequently adopted by pro-democracy protesters in Hong Kong, according to this AFP news report.

"Bank of China and HSBC are on its two sides nearby. Li Ka-shing, show his attitude, and go to the front place!"

But the image has been doctored to include the slogan. A reverse image search found this Instagram post published on July 23, 2019 which shows the same scene without the slogan on the building.

Below is a side-by-side comparison of the doctored image (L) and the Instagram photo (R): 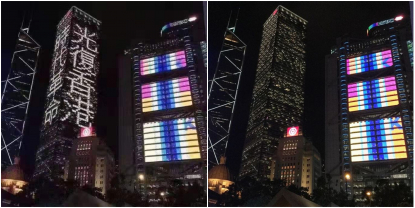 Comparison of the doctored image (L) and the Instagram photo (R)

Jeremy Lau, spokesperson for CK Hutchison Holdings, told AFP by email on October 18, 2019 that the image with the slogan was “a hoax”.

The photo was taken here in Statue Square, Central, according to Google Maps.