A photo of South Korean President Moon Jae-in’s son has been shared repeatedly in multiple posts on Facebook in December 2020 alongside a claim that it shows him violating social distancing measures by attending an art exhibition without wearing a mask. The photo has been shared in a misleading context: the image was taken in October 2020 at a press event for an art gallery where wearing masks was not mandatory, according to the South Korean health ministry’s guidelines at that time.

The claim was shared here on Facebook on December 22, 2020, alongside two images. 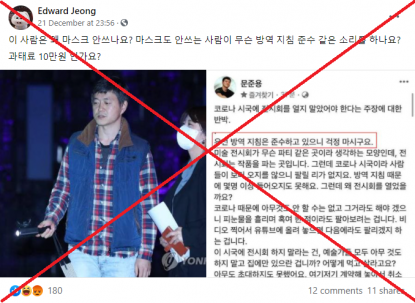 A screenshot of the misleading post. Captured on December 28, 2020.

The first image shows an unmasked Moon Joon-yong, the son of South Korean president Moon Jae-in, standing next to a masked woman.

The second image is a screenshot of Moon’s Facebook post published on December 21, 2020, responding to public criticism over an art exhibition he held in December.

The art exhibition of Moon’s work hosted by Keumsan Gallery was on display in South Korea’s capital city Seoul from December 17 to 23.

As of December 29, 2020, the greater Seoul area maintains social distancing restrictions of level 2.5, which means wearing a mask indoors is mandatory. Anyone found to be in breach of the regulations can face fines.

Part of the Korean-language text in the screenshot of Moon’s Facebook Post translates to English as: “Regarding the criticism that I should not have held my exhibition due to the pandemic.

“Do not worry because I follow all necessary social distancing measures.”

A similar claim was shared here, here, here and here on Facebook.

The first image, however, has been shared in a misleading context.

Part of the Korean-language report translates to English as: “Joon Moon, the son of President Moon Jae-in, explains his artworks to reporters in the afternoon on the 22nd, a day before ‘2020 Paradise Art Lab Festival’ begins.”

2020 Paradise Art Lab Festival, an art exhibition organised by Paradise Cultural Foundation, was held at Paradise City between October 23 and November 1, 2020. It featured artwork from Moon and several other artists.

On the same day the photo was taken, South Korea was put on level 1 pandemic restrictions, according to this government statement from the Ministry of Health and Welfare. The country maintained level 1 restrictions between October 12 and November 18, 2020. The alert level was raised to 1.5 on November 19, 2020 after a surge in the number of confirmed coronavirus cases.

Under such a scheme, wearing a mask is recommended but not mandatory except at “designated facilities.”

According to this policy published by the health ministry, “a designated facility,” where wearing a mask is mandatory under the level 1 scheme, includes: protest sites; indoor sports facilities; public transportations; medical facilities; pharmacies; nursing homes; customer call centres; distribution centres and events and gatherings with more than 500 attendees.

Screenshot of the health ministry guideline on designated facilities. Captured on December 23, 2020.

A spokesperson for Paradise Cultural Foundation told AFP the photo in the misleading post was taken on October 22, 2020, during a press preview event at the Incheon gallery Studio Paradise, before the exhibition was opened to the public.

“We strictly followed all required social distancing measures on that day. For example, only up to three journalists were allowed to enter the venue at the same time and ask questions to each artist,” the spokesperson said during a phone interview on December 22, 2020.