A photo has been shared hundreds of times across Twitter, Facebook, Weibo and Instagram alongside a claim it shows US President-elect Joe Biden’s executive assistant being arrested for spying on Donald Trump in December 2020. The claim is false; the photo, taken in December 2015 by US news agency Associated Press (AP), shows FBI personnel escorting a former US county police chief to a vehicle. 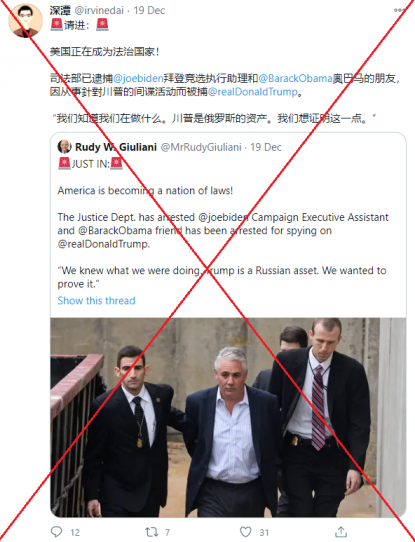 The post links to another tweet shared from a parody account for US politician Rudy Giuliani. It includes a translated version of that tweet’s claim from English into simplified Chinese characters.

The claim states: “JUST IN: America is becoming a nation of laws!

“The Justice Dept. has arrested @joebiden Campaign Executive Assistant and @BarackObama friend has been arrested for spying on @realDonaldTrump.

“'We knew what we were doing. Trump is a Russian asset. We wanted to prove it.'”

A reverse image and keyword search on Google found the photo was taken on December 9, 2015 by photographer Steve Pfost. It was published on the AP website here. 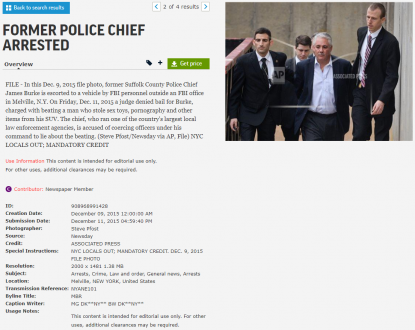 Below is a screenshot comparison of the photo in the misleading tweet (L) and the AP photo (R):

The AP's caption reads partly as: “In this Dec. 9, 2015 file photo, former Suffolk County Police Chief James Burke is escorted to a vehicle by FBI personnel outside an FBI office in Melville, N.Y. On Friday, Dec. 11, 2015 a judge denied bail for Burke, charged with beating a man who stole sex toys, pornography and other items from his SUV. The chief, who ran one of the country's largest local law enforcement agencies, is accused of coercing officers under his command to lie about the beating.”

The misleading posts did not name a specific individual.

As of December 24, 2020, there are no credible reports that any executive assistant employed by Biden has been arrested on suspicion of spying on Trump.