Social media posts shared thousands of times claim President Donald Trump’s deployment of federal officers to Portland, Oregon, where camouflaged agents are accused of abuses against protesters, was made possible by a law signed by his predecessor Barack Obama. This is false; the agencies responsible say they are operating under a long-standing provision to protect federal property, and legal experts dubbed such claims “crazy” and foolish.

“When everyone just blames Trump but forgets who actually signed the law authorizing federal agents to snatch protestors off the streets in Portland,” says a July 20, 2020 post.

It features a photo of Obama, who on December 31, 2011 signed the National Defense Authorization Act, a defense funding bill which that year incorporated controversial provisions governing the military detention of terrorist suspects. 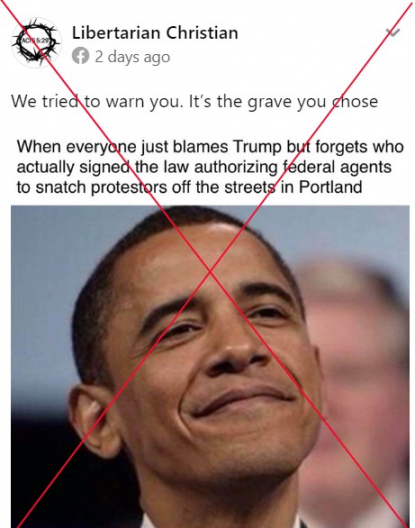 “Do you know what the NDAA is?” asked a July 20 Instagram post from Trump aide Lynne Patton, claiming the law allows the president “to detain anyone he wants, for any reason he wants, without a trial.”

A July 23 search using social media analysis tool CrowdTangle showed the post was liked more than 5,000 times, and that it is no longer available. 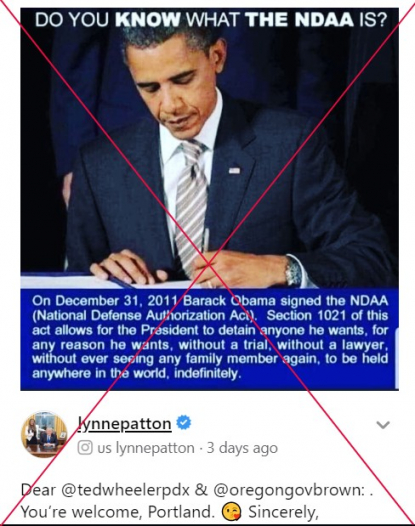 Other versions of the claim have been shared by accounts across the political spectrum, including here in a post that claims: “Trump’s secret police abductions use Obama’s 2012 NDAA suspension of habeas corpus and rendition powers.”

On June 26, Trump issued an executive order for federal agencies to provide “personnel to assist with the protection of Federal monuments, memorials, statues, or property,” some of which had been vandalized during protests against racism and police brutality -- most of them peaceful -- that erupted nationwide after the death in police custody of a black man named George Floyd in May.

While protests have waned elsewhere, they have continued in Portland, and federal officers, including from Customs and Border Protection (CBP), were sent in as part of a task force under Trump’s order.

Asked about the legal authority under which CBP is deployed there, CBP Director of Media Lawrence "Rusty" Payne, in an email to AFP, cited 40 United States Code Section 1315, which allows for employees of the Department of Homeland Security to be designated for the protection of federal property.

Acting Homeland Security Secretary Chad Wolf, at the 9:10 mark of a July 21 press conference, said “the law is clear on what our authority entails,” and read from the code cited by Payne. He added at the 45:05 mark that the authority “has been on the books for decades, decades.” 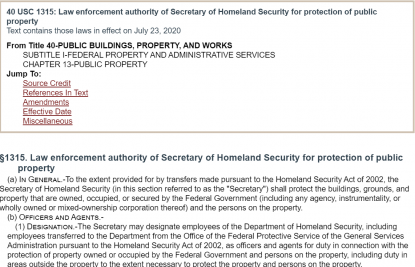 Stephen Vladeck, a professor at the University of Texas School of Law, in a tweet also said they are relying on that code. He called the posts blaming Obama “crazy” and said that although the NDAA includes “troubling military detention provisions,” they “have literally *nothing* to do with what DHS is doing in Portland.”

Democrats in Congress have asked for more clarity about the authority under which officers are acting.

"The legal basis for this use of force has never been explained,” the Democratic chairs of relevant congressional committees wrote to the independent inspectors general for Homeland Security and Justice, asking them to investigate that and other aspects of the deployment. Both agreed to probes.

Joe Margulies, a professor of law and government at Cornell, told AFP by phone that the claims in the social media posts “are remarkable for their foolishness.”

He said the 2012 NDAA did not affect the right of detained Americans to a court hearing.

“So to the extent that anybody picked up in Portland is a US citizen, there is nothing in the NDAA that year or any other year that deprives them of their right to go to court and challenge their detention,” he said.

Even non-citizens detained in the US have that right in habeas corpus, said Margulies, author of the book “Guantanamo and the Abuse of Presidential Power.”

He added that only Congress has the power to suspend it, which has never happened in the post-9/11 era. To suggest otherwise, he said, “is just really irresponsible, in addition to being wrong. It's just plain wrong.”

As for rendition, it began prior to 9/11 and involves “picking up someone in location X and detaining them in location Y separate from the criminal justice system. That's not what's going on in Portland. We've never rendered anybody in the United States.” 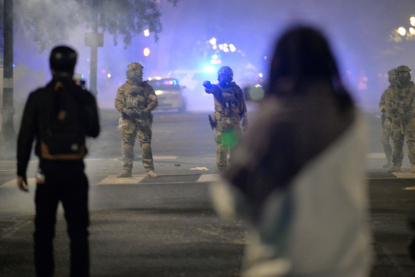 Federal agents’ behavior in the city has led to allegations of abuse of power and comparisons with a “banana republic.”

The city’s mayor was tear gassed, and regular clashes have occurred between officers and what DHS calls “violent anarchists” around the Federal Courthouse.

Oregon’s Attorney General Ellen Rosenblum is suing 10 federal officers, Homeland Security, CBP and other federal law enforcement agencies, alleging they cannot be properly identified and have violated constitutional rights by detaining protesters in unmarked vehicles, and for “removing them from public without either arresting them or stating the basis for an arrest.”