This is not real footage of an Amazon drone-delivery blimp

A video clip purporting to show delivery drones emerging from a giant blimp with the Amazon logo on it has been viewed hundreds of thousands of times in online posts with captions such as: “A step closer to the dystopian world I crave”. The video is actually computer-generated and was created by a Japanese artist as an April Fool’s joke. While some commenters on the posts acknowledged the video was not real, many appeared to believe that it was.

The clip, in which a white blimp bearing the logo of international tech firm Amazon appears to glide through the air beside a hill and above a town as multiple small drones emerge from it and fly away in different directions, has been shared thousands of times on Facebook and Twitter.

The video posts have different captions. For example, this one viewed around 300,000 times since it was published to Facebook on April 1, 2019 – April Fool’s day – says: “a step closer to the dystopian world i crave”.

Another Facebook post published April 2 here contains the same video which has been viewed 14,000 times alongside the caption “amazon overlord mothership sends out fighter drones”.

Other Facebook posts, viewed fewer times, have captions which claim the video shows “Amazon's delivery drones in action!” here and that “Amazon now has a Drone Aircraft Carrier, that flies” here. Similar claims have also been made on Twitter, for example here.

Below is a screenshot of one of the Facebook posts: 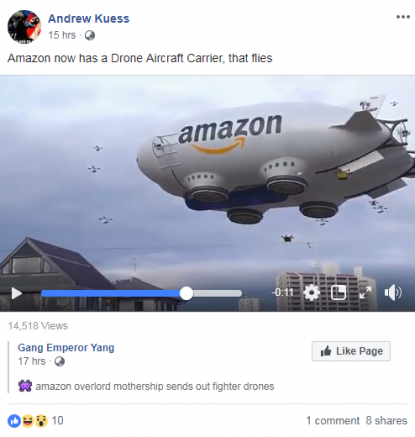 The image below contains screenshots of selected comments from the Facebook posts that indicate the commenters believed that the video was real. The identity of the commenters has been redacted.

For example, one person wrote: “The future is N O W” while another person wrote to their friend: “Weren’t you just arguing with me saying something like this WOULDNT ever happen lol”.

However, some of the commenters and media reports on the video such as here in Gizmodo and here on news.com.au pointed to this twitter thread by Japanese user @zozi009 who said they had made the clip using CGI (computer-generated images).

AFP’s Tokyo bureau translated the tweets and the description in the account’s bio, which says:

"Bored person making various videos. AKA person of Itsukushima Shrine. Mainly on Nico-Doh but recently posting strange videos on Twitter. Moved all the girls of PSvita's KanColle on Live2D for work. Details are on blog. Teaching 3D at vocational school. Please RT"

The tweet embedded below contains the same video as the online posts and says in Japanese:

“There were rumours about delivery by drones but I didn't know it has already started. I thought it was for the future” with an English translation and the hashtags: “#Aprilfool #zozifilming”

There was a talk about delivery by drone, but it had already started. I thought it was a story ahead.#エイプリルフール #zozi撮影 pic.twitter.com/hFrmGOKwof

The second tweet contains three pictures showing the method used to create the video clip, involving a 3D netting model of the blimp.

It says: “Spoilers in the afternoon. I don't think anyone believes it, but just in case. I created HDRI with thetaV and did the writing. I added extra stuff on the background but it seems not many noticed it.”

HRDI stands for high-dynamic-range imaging and and thetaV is a type of spherical camera, for example this one for sale – on Amazon.

A third tweet from @zozi009 here says the blimp in the clip was inspired by a real airship developed by defence company Lockheed Martin, which can be seen in this Youtube video published by the company on August 24, 2010, embedded below:

Amazon is developing a drone delivery system called “Prime Air”, described on its website here as “a future delivery system from Amazon designed to safely get packages to customers in 30 minutes or less using unmanned aerial vehicles, also called drones.”

On the same page it says this system is being tested and is not yet operational: “We will deploy when and where we have the regulatory support needed to safely realize our vision.”

One Twitter user who posted the clip here on April 1 with the caption “This right here is borderline dystopian” in a post that was retweeted more than 23,000 times later posted another tweet acknowledging the video was false.

ok update this is just some late stage capitalism CG!