No, this is not a real photo of Indian National Congress party General Secretary Priyanka Gandhi wearing a cross necklace

A photo of Indian National Congress party General Secretary Priyanka Gandhi has been shared hundreds of times on Facebook and Twitter alongside claims it shows her wearing a cross necklace. The claim is false; the photo has been doctored from an original AFP image which shows Gandhi wearing a leaf-shaped pendant at a rally in February 2017.

The image was shared here by a Facebook page with more than 56,000 followers on March 29. 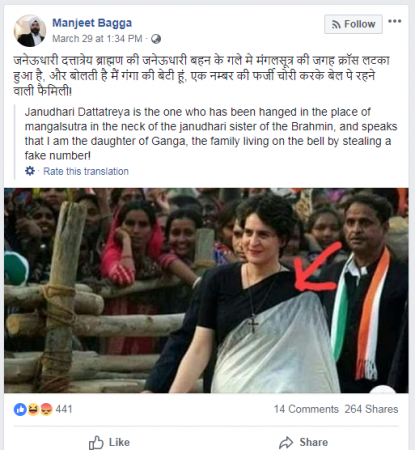 The Hindi-language caption translates to English as: “Sister of a Janeu wearing upper-caste Hindu is wearing a cross instead of a Mangalsutra.”

"Janeu" is a reference to a holy thread worn by Hindu men. This article published on March 5, 2017, by Indian TV channel Zee News explains the significance of the Janeu.

"Mangalsutra" is a type of sacred gold necklace worn by married Hindu women. Here is a definition of mangalsutra in the Collins English Dictionary.

“And she says that she is the daughter of Ganga. She is part of the corrupt family, who is out on bail," the misleading post's caption says.

"Ganga" is a reference to India’s holy river, the Ganges.

Gandhi describes herself as the General Secretary of the Indian National Congress party on her official Twitter profile.

The misleading image and similar claims has been posted widely on Facebook, for example here and here, and on Twitter here.

A reverse image search on Google found the photo had been doctored from this AFP image of Gandhi taken at a rally in 2017.

Below is a screenshot of the image on the AFP website: 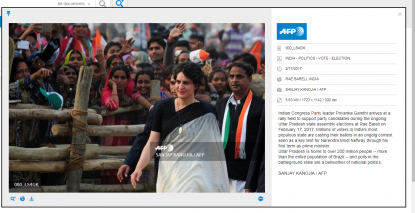 A screenshot of the original image on the AFP website

The caption states: “Indian Congress Party leader Priyanka Gandhi arrives at a rally held to support party candidates during the ongoing Uttar Pradesh state assembly elections at Rae Bareli on February 17, 2017. Millions of voters in India's most populous state are casting their ballots in an ongoing contest seen as a key test for Narendra Modi halfway through his first term as prime minister. Uttar Pradesh is home to over 200 million people -- more than the entire population of Brazil -- and polls in the battleground state are a bellwether of national politics. SANJAY KANOJIA / AFP.”

The image was also published here in a report by Abu Dhabi based newspaper The National on February 19, 2017.

Here is a screenshot of the report: 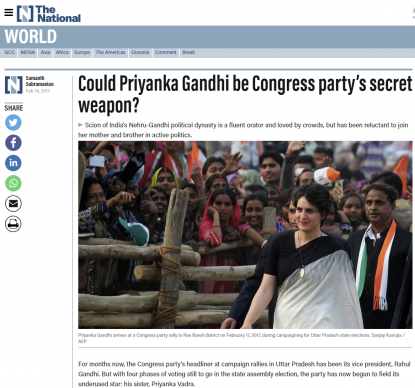 A screenshot of the report on The National