A video viewed thousands of times on Facebook and YouTube claims to show victims of Cyclone Idai, which hit Mozambique in March. This is false; the video actually shows drowned migrants off the coast of Libya in 2014.

The video, shared here, here and here on Facebook and here on YouTube has racked up more than 4,000 views. The posts claim that the footage shows victims of Cyclone Idai, a powerful . tropical cyclone which ravaged southern Africa in March, leaving more than 700 dead, as reported by AFP.

The misleading video of washed up bodies has been viewed more than 1,800 times on YouTube, with the caption ‘Mozambique floods 2019 Horrible scenes dead bodies float along the shores Indian Ocean’. 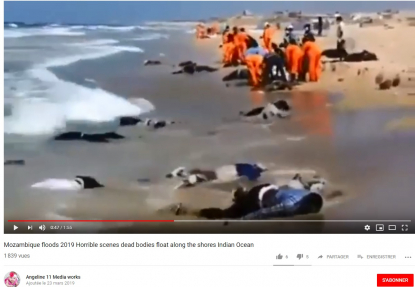 The same footage has been shared on multiple Facebook accounts, with users claiming it shows ‘bodies of people who were swept away by cyclone Idai’, which are ‘beginning to appear in the Indian ocean in Mozambique’.

A Google reverse image search, using video stills obtained using verification tool InVID, led to Turkish news site Haberler, which features the video in an article from August, 26 2014 about the death of migrants whose boat sank off the coast of Libya. The article gives the source of the video as ‘AA’, referring to Turkish Anadolu Agency.

The same video was published online by Getty Images with the caption ‘Rescue teams try to remove dead body of refugees in Libya on August 25, 2014. An overloaded boat carrying suspected illegal African immigrants sank and at least 200 passengers drowned, many of them missing.’

AFP reported on the disaster in an article from August 25, 2014 entitled ‘170 bodies of African migrants found from Libya shipwreck’. 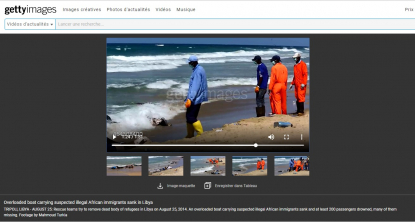 The same video was also presented as showing victims of a devastating earthquake and tsunami last year in Indonesia.

A YouTube search with this Indonesian caption reveals similar posts of the video here and here, each claiming it shows victims of the tsunami last September.

In October 2018, Sutopo Purwo Nugroho, from Indonesia's National Agency for Disaster Management, called out the video as a ‘hoax’. He posted the footage on Twitter with a caption that translates as: ‘If you see this video with a claim saying it is a video of tsunami in Palu, it is a HOAX. This is not a tsunami in Palu but an incident abroad. The conditions of the sea, the shore, victims and the officers show that it is not an incident in Palu or Indonesia. Please disregard it when you encounter it.'