Not only is the source of the virus unknown, but the dead cells inside rhino horn also are incapable of keeping it alive

Multiple posts shared hundreds of times on Facebook claim the novel coronavirus comes from the use of rhino horn. The claim is false because not only is the source of the crisis in China still unknown, but the dead tissue that rhino horn consists of also cannot sustain a virus, which needs living cells to replicate.

The claim appears in the form of a meme archived in multiple Facebook posts here, here and here.

The posts have been shared more than 2,000 times and include an image of what appear to be two rhino horns, along with the following statement: “It’s believed the corona virus is possibly caused due to the use of rhino horn.” Former international cricket star Kevin Pietersen, an active campaigner in the fight to end rhino poaching, added some celebrity fuel to the fire by posting the meme on his verified Twitter account on January 26, 2020 -- asking his 3,9 million followers to “PLS RT?!?!?!!” [Please Retweet]. 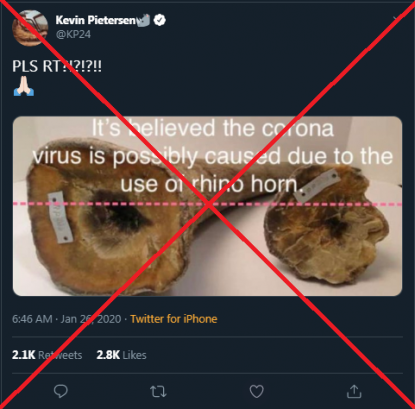 A screenshot taken on January 30, 2020 of the misleading tweet

The response was mixed and covered in this news report, with some praising Pietersen and assuming the intention was to further rhino conservation.

Others, however, believed the misinformation was damaging to the conservation cause, especially without evidence to back up the claim. 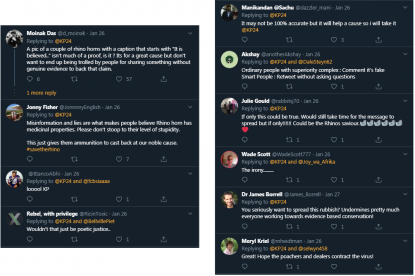 Screenshots taken on January 30, 2020 of the replies to the misleading tweet

James Borrell, a research fellow and conservation scientist, replied: “You seriously want to spread this rubbish? Undermines pretty much everyone working towards evidence based conservation!”

South Africa is home to the world's largest population of rhino and for years has tried to combat rampant poaching. The animals' horns are prized in the Far East where they are traded illegally for vast sums of money.

The novel coronavirus emerged from the central Chinese city of Wuhan in early December 2019, as reported by AFP here, but the exact source of the outbreak -- traced to a local "bush meat" market -- remains unknown.

The World Health Organisation (WHO) says the virus, officially known as "2019-nCoV,"  is in the "family of viruses that include the common cold, and viruses such as SARS and MERS."

And the Centers for Disease Control and Prevention (CDC) says public health officials were hard at work trying to identify the source of the 2019-nCoV.

“Coronaviruses are a large family of viruses, some causing illness in people and others that circulate among animals, including camels, cats, and bats. Analysis of the genetic tree of this virus is ongoing to know the specific source of the virus.”

Researchers think the new virus probably came from bats, as the SARS virus did, with which it shares 80 percent of its genetic makeup, as reported by AFP here.

On Monday, January 3, 2019, China's ambassador to South Africa, Lin Songtian added his voice to the debate over the origins of the virus.

“The source of infection from this new coronavirus up to today in Wuhan, has not been discovered, including [by] America, [by] all the countries in the world, the WHO as well, up to today did not discover where the infection came from,” said Songtian at a press briefing in Pretoria.

Even with the surrounding uncertainty of where the virus came from, it could not have been rhino horn, said pathologist and head of medical virology for the University of Stellenbosch, Professor Wolfgang Preiser.

"Viruses need live cells, live organisms for themselves to replicate, so even the rhino horn as such, even if it’s still on the rhino, would not be able to be infected with the virus because the rhino horn is dead, it's like our fingernails. A virus cannot grow in your fingernails,” said Preiser in a phone call with AFP.

He added that by the time a horn is traded in the Far East, it has been detached for weeks, months or even years, making it even less viable as a host for infectious viruses.

"There are a lot of rumours being spread, it's many fools jumping on the bandwagon and I think they are doing a lot of harm by confusing people and confusing the message,” said Preiser.

At least 425 people have died since the outbreak began, with more than 20,400 confirmed cases worldwide, as reported by AFP.