No, a Zambian police station was not the latest target of assailants armed with immobilising gas

A Facebook post claims that criminals armed with an incapacitating spray attacked a Zambian police station, the latest in a string of gas attacks in the country. Police denied the claim, saying not only is it false, but none of their stations have been targeted in this way.

Archived here, the post has been shared 20 times and claims the Mufulira Police station in Zambia’s Copperbelt region was the subject of a gas attack. 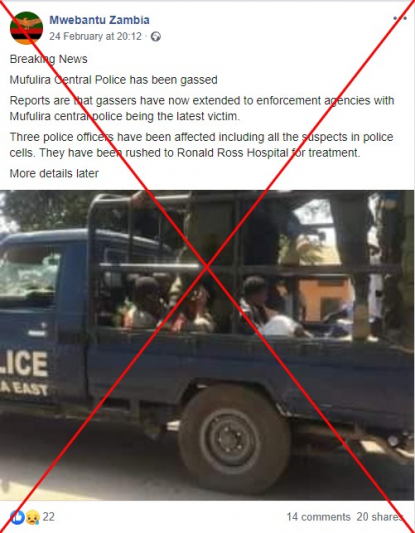 A screenshot taken from a Facebook post on February 26, 2020, with the false claim that a police station had come under attack

Three officers, as well as suspects in the cells, were taken to hospital for treatment as a result, it claims.

However, police spokeswoman Esther Katongo denied the report. “Nothing of this nature has ever happened at any police station,” she told AFP in a WhatsApp message.

A reverse image search also reveals the picture is unrelated to the claim and was used by various media, including in this report on riots in Kitwe, central Zambia last August.

The post is the latest in a wave of misleading information on social media related to a spate of attacks in Zambia where criminals are reportedly using an unnamed gas to knock out their victims.

This AFP report here described how the misinformation has allegedly provoked a string of mob attacks on suspected perpetrators and how it has led to recriminations and accusations between the country’s two main political parties.