No, your heart won’t look like this from simply eating pork

An image widely shared on social media purports to show the effects of eating pork on the human heart. The image however, is actually of a pig’s heart infected with cysticercosis, the result of ingestion of ova of the pork tapeworm. Humans can ingest it too from contaminated soil, water or food - even vegetables but it doesn't manifest in the same way.

An account based in South Africa with over 44 thousand followers posted a tweet on November 6, 2018 with the image, claiming “the heart of a person who consumes pork”. The post has since been retweeted 3,617 times and garnered 2,547 likes. 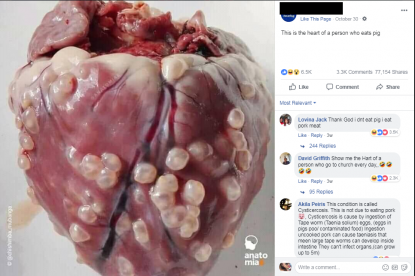 The post elicited various reactions: some claiming nonchalance over the supposed risk while for others, it reaffirmed the importance of being vegetarian/vegan. The picture can also be found here and was reshared here. 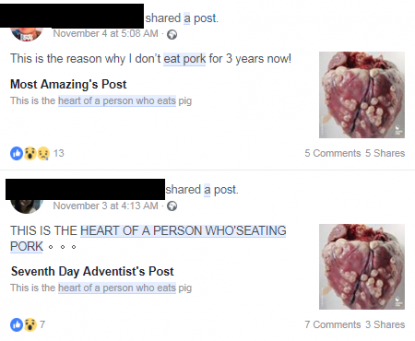 a screenshot of the Facebook search showing similar claims

But the image contains two watermarks: one led back to a post on an Instagram account from July 10, 2018, along with the caption “parasite paradise #porcine cysticercosis”.

A LinkedIn profile under the same name shows an individual with a history in agriculture and livestock, pursuing a PhD in parasitology -  the most likely person to have posted the heart. AFP contacted the account but did not receive a reply. 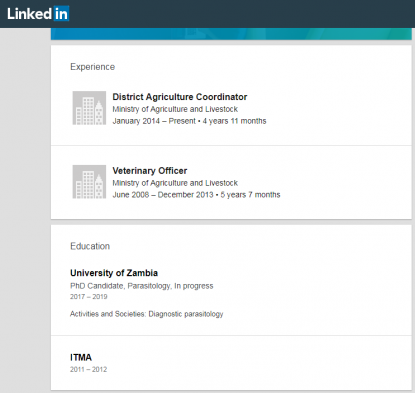 a screenshot of the LinkedIn profile

The second watermark is a logo from a Brazil-based social network which claims to show “what the laboratory and anatomy books do not show you”. Anatomia é posted the image to its one million plus followers on Facebook on October 13, 2018, with a caption originally in Portuguese about a rare case of cysticercosis on a pig heart: 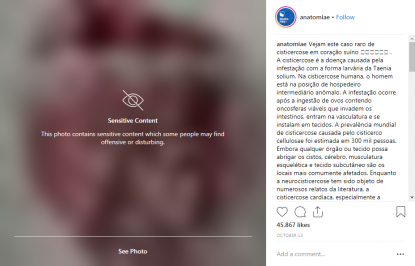 That post garnered 45,866 likes on Instagram, 977 shares on Facebook. Anatomia é added a note to the bottom of the post to clarify that it was a pig heart and the rarity of the disease in humans. 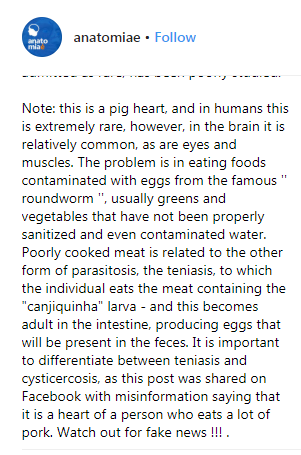 Dr Nqoba Tsabedze, academic head of cardiology at the University of the Witwatersrand in Johannesburg told AFP that the picture did not show the effects of eating pork, but rather an infection from a parasite.

“People are suggesting that the pork protein somehow causes your heart to react and that is not true - the infectious connection has been lost in translation.”

Parasites use the pig as part of their life cycle but Tsabedze says if you cook pork meat well, those parasites die. The parasite also has different presentations in each host.

“It’s very unlikely, almost impossible that humans would present with this - and it would not be from eating pork. Hypothetically as a human being, you would be contaminated from eating undercooked pork meat with viable spores in the meat - but the pig actually eats contaminated waste.”

According to the World Health Organisation Cysticercosis is a natural infection of pigs, but it can also affect humans, usually when they swallow Taena solium (pork tapeworm) egg-contaminated soil, water or food (mainly vegetables). Taeniasis is acquired by humans through the inadvertent ingestion of cysticerci in undercooked pork. 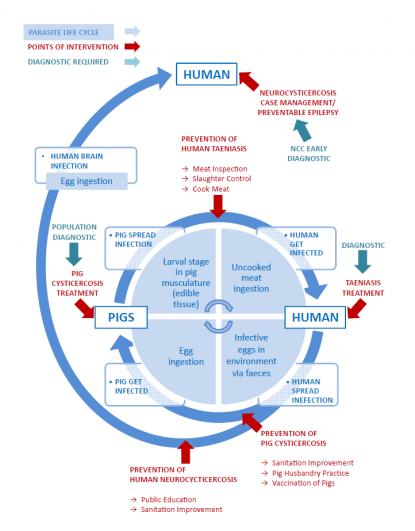 However, the frequency of both taeniasis and cysticercosis conditions has decreased in developed countries due to stricter hygiene standards.