No, this is not an image of Nigerian soldiers killed by Boko Haram

An image shared online by Nigeria’s main opposition party claims to show Nigerian soldiers killed by Boko Haram in an attack on a military base on November 18, 2018. However, the image is an Associated Press photo from 2011, showing the bodies of men Al-Shabab militants in Somalia claimed were African Union peacekeepers killed by the terrorist group.

An image of President Muhammadu Buhari and an image of several dead bodies lying on the ground in combat gear was posted with the statement. 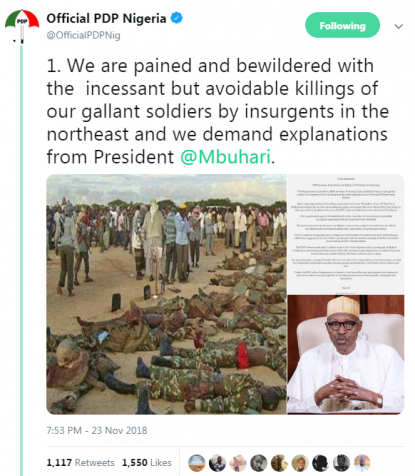 Yet the image does not relate to Boko Haram or Nigeria.

The image, published by the Associated Press on October 20, 2011, shows Al-Shabab militants displaying the bodies of of men they claimed were African Union peacekeepers killed in Somalia.

It has since been wrongly attributed to other terrorist groups in several articles and posts. Following the PDP post, numerous Twitter accounts have now falsely attributed the image to the recent killings by Boko Haram. 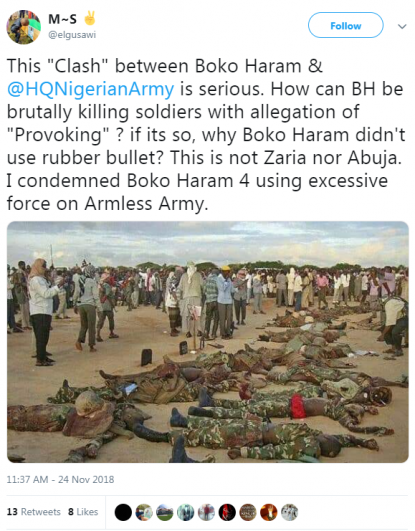 A number of Twitter users, including government officials and supporters, have criticised the use of the image by the PDP.

Other images shared online also purport to show Nigerian soldiers in the aftermath of the killings in Metele village.

An image posted by a Twitter user on November 23, 2018, claims to show a Nigerian soldier in anguish, kneeling at the dead body of a fellow soldier. 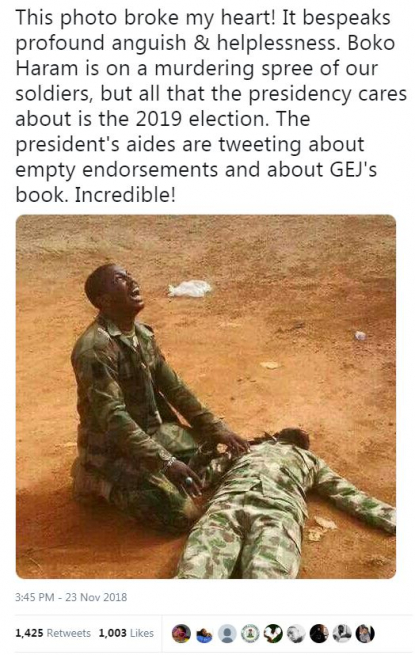 Yet the image is not of a Nigerian soldier but is taken from a Kannywood film called “Abu Hassan” released on February 20, 2018. Kannywood is the film industry in northern Nigeria.