No, this video doesn’t show a gun battle between South Africans and foreigners — they’re actors filming a shootout

A nine-second video, purportedly showing a dramatic shootout between South Africans and foreigners in a township in Cape Town or Johannesburg, has been shared more than 6,000 times by multiple accounts on social media. In fact, a longer video of the same scene shows that the participants in the “shootout” are actors.

In one Facebook post that has been shared 5,000 times, and which we’ve archived here, the video is captioned: “Yesterday shooting in Alexander south Africa (Citizens vs foreigners ) say no to xenophobia”. 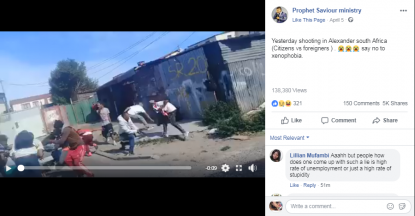 The caption appears to be a reference to Alexandra, the Johannesburg township. Another post suggested the shootout took place in Cape Town.

In March, parts of South Africa were hit by the latest in a long series of outbreaks of xenophobic unrest when protests against foreign-owned shops spilled into violence.

Immigrants have frequently borne the brunt of anger resulting from chronic unemployment in South Africa, with locals accusing them of taking up scant jobs.

As reported by AFP, some 300 Malawians were displaced from their homes in the city of Durban during the latest round of violence, and dozens asked to be repatriated.

Online, many people in South Africa and beyond expressed anger over the latest attacks on immigrants.

However, various old images began circulating again in social media posts about the most recent violence, as we noted in this AFP Fact Check.

As for the video of the shootout, a few clues led Facebook users to believe it might be staged or show a movie scene: 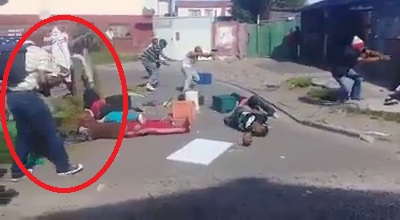 A screenshot taken on April 12, 2019, edited to highlight the man with the backpack backing slowly out of shot 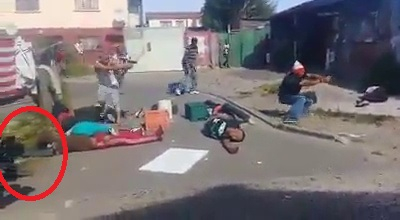 A screenshot taken on April 12, 2019, edited to highlight what looks like a video camera

A tip-off from an AFP source in Cape Town suggested the video was filmed during the shooting of a movie in the city’s Parkwood suburb.

A Facebook search of “Parkwood movie shoot” then led us to another video. It’s longer than the nine-second one shared in the post linking it to xenophobic violence. 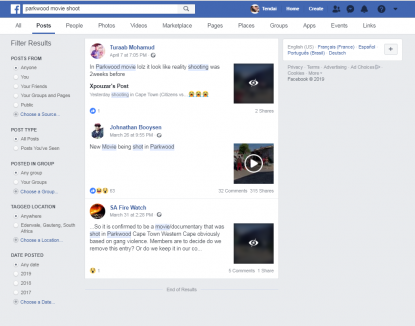 A screenshot taken on April 12, 2019 of Facebook search results

The nearly 90-second video, which we’ve archived here, was posted on March 26. It was captioned “New Movie being shot in Parkwood” and had more than 300 shares. 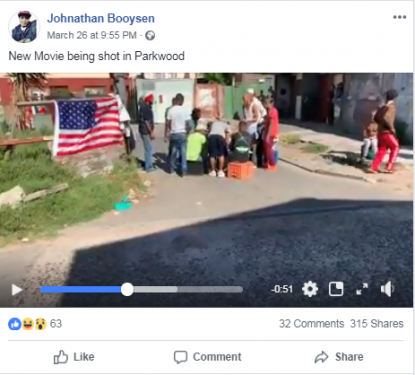 As you can see, this video was shot at the same scene. In the background you can see the same green fencing and yellow graffiti on the wall. If you look closely you can also see that the participants in the shootout are the same, including the man wearing red trousers with a white stripe down the side. 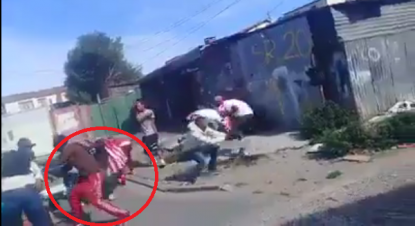 A screenshot taken on May 2, 2019 highlighting a man in red trousers in the misleading post 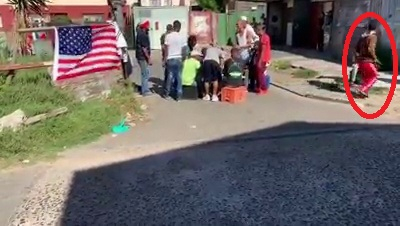 You can see the same man in red trousers in the longer video, as per this screenshot taken on May 2, 2019

But in the longer video, you can clearly see camera operators walking around before the shooting starts, and a crowd gathered to watch the scene. After the shooting, the crowd cheer and applaud.

As previously reported by AFP, Cape Town and its surrounding region are regularly afflicted by gang violence. Many of those commenting on the video expressed dismay at what they feared would be movie perpetuating that image or even glamorising it. 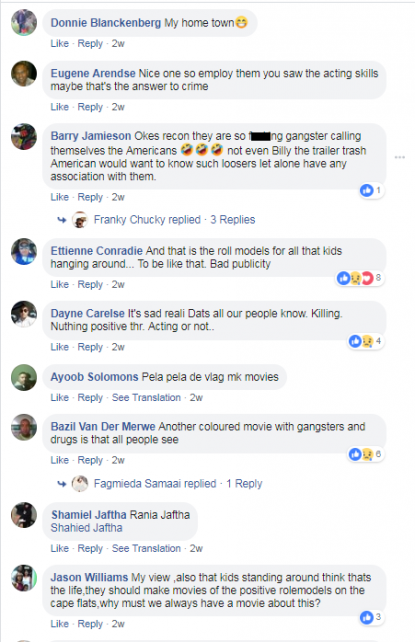 As for the film itself, we’re still trying to contact the team behind it. We’ll update this post when they get back to us.