No, this video does not show a Pakistan aircraft at the Paris Air Show

A video has been viewed more than one million times in multiple posts on Facebook in June 2019 which claim it shows a Pakistani JF-17 aircraft at the Paris Air Show. The claim is false; the video shows a radio-controlled model plane at an event in Germany in 2014. 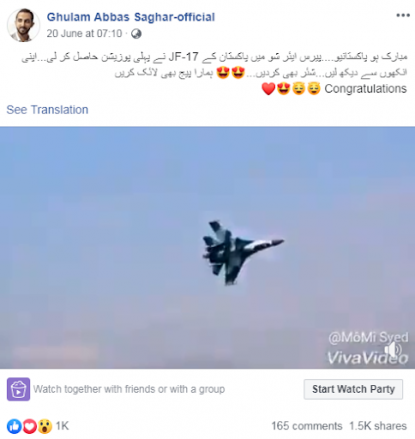 The post’s Urdu caption translates to English as: “Congratulations Pakistanis.... in Paris Air Show Pakistan's JF-17 got the first position... see your eyes... share it too... also like our page Congratulations”.

“JF-17” refers to a JF-17 Thunder aircraft used by the Pakistan Air Force (PAF). Here is a detailed description of the aircraft on the website for the Pakistan Aeronautical Complex Karma, an organisation which supplies equipment to the PAF.

The same video has also been shared on Facebook here, here and here with a similar claim.

The claim is false; the video shows a radio-controlled model plane at an event in Germany in 2014.

A reverse image search on Yandex found this video published on YouTube on September 23, 2014, by the verified account for RC MEDIA WORLD, a channel which regularly posts content about model airplanes.

The footage from the video in the misleading posts matches the YouTube video between the 1:22 mark to 5:45. 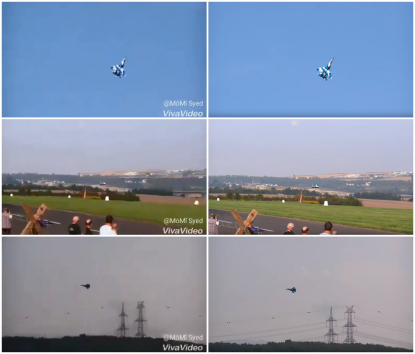 Genuine footage of a Pakistan JF-17 Thunder aircraft flying at the Paris Air Show 2019 can be viewed on YouTube here.