No, this video does not show the exhumed body of 2002 Bali bombings terrorist

A video has been viewed thousands of times in multiple Facebook posts that claim it shows the exhumed body of Indonesian terrorist Imam Samudra, who was convicted by an Indonesian court for his role in the 2002 Bali bombings and executed in 2008. The claim is false; the video shows the body of another Indonesian inmate, Yaser bin Thamrin, who died in hospital in July 2018 after falling ill in prison. He was not accused of having any connection to the Bali bombings. 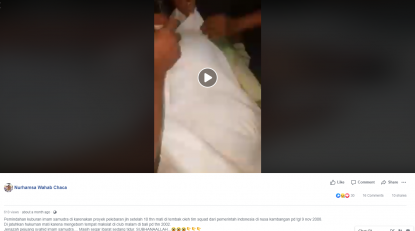 The caption of the post translates to English as: “The grave of Imam Samudra was relocated because of a street-widening project after 10 years dead by a squad team of the Indonesian government on November 9, 2008. Sentenced to death penalty because bombing sinful night clubs in bali in year 2002. The body of martyr fighter imam samudra…. Still fresh like he was sleeping. GOD IS PERFECT..”

The same video and claim has appeared on Facebook previously, for example here on August 2018, where it has been viewed more than 1,900 times.

The claim is false; the video in the misleading posts has circulated online since July 2018. It shows the body of another Indonesian inmate, Yaser bin Thamrin, who died in hospital on July 17, 2018, following an illness in prison.

This video was shared to YouTube on July 22, 2018, with a headline, translated to English, reads:  “God Is Perfect… Yaser Bin M. Thamrin, Suspected ‘Terrorist’ Dies With a Beautiful Face.”

The same footage was also shared on the verified Facebook page of Indonesia’s police force here on July 24, 2018.

A red-bordered stamp with words “HOAX”, “Multimedia Bureau” and “Indonesian Police Public Relations Division” has been added to the footage.

The video also displays the words “Be Smart Netizen”, and the text in a white box beneath the video reads:

“The circulation of the video in YouTube under the name of Rudi Yonda with the title buried body but still intact is HOAX or NOT TRUE.
The body isn’t the body of Imam Samudra. But it’s the body of Yaser Bin M. Thamrin, a terrorist inmate at the Gunung Sindur prison, Bogor, West Java. Yaser died because of an illness at the South Tangerang Regional General Hospital on Tuesday, July 17, 2018.”

The caption of the post repeats what is written in the white box.

Police spokesman Mohammad Iqbal issued a written press statement on July 23, 2018, as reported here and here. “This is a video of Yaser bin Thamrin, a terrorist inmate at Gunung Sindur,” he said.

This report published by CNN Indonesia on November 1, 2017, states that Yaser bin Thamrin was arrested in Bima regency in connection with the shooting of two police officers.

"Police spokesman Brigadier General Rikwanto said the arrests were a development from the operation Densus 99 did at Gunung Mawu Rite, Bima district, the day before.

"He said the five suspected terrorists were believed to be linked to the shooting incident of police officers Abdul Gafur and Zainal Abidin in Penatoi, Mpunda, Bima City, on Sept 11, 2017.

The video of Yaser’s body has also appeared on Pakistan’s social media posted which claim it shows the body of Umar Patek, a convicted Bali Bombing terrorist, who is still alive and currently detained in Indonesia. An AFP Fact-check report about the claim was published here.