No, this video does not show an Indian lawmaker from a regional opposition party dancing provocatively with a woman

A video in which two men dance with a woman at a daytime party has been viewed thousands of times in Facebook and Twitter posts that claim one of them is Yuduvansh Kumar Yadav, an Indian lawmaker from an opposition party in the state of Bihar. The claim is false; neither of the two men seen dancing with the woman in the video are Yadav.

The 32-second clip has been shared in multiple Facebook posts, including this one published on June 10, 2019, which has been viewed more than 800 times.

In the video, two men dressed in white dance with a woman in a black-and-white dress. They hold her hands, twirl her around, and pour a drink into her mouth.

A Hindi-language caption on the Facebook post translates as: "Lalu's lawmaker Yuduvansh Kumar Yadav was caught in the wrong action with a girl in Manipur. He had gone to Imphal for a study tour.”

Yuduvansh Kumar Yadav is an RJD lawmaker in Bihar; here is his official profile in Hindi on the Bihar Legislative Assembly website. Imphal is the capital city of the north-eastern Indian state of Manipur. 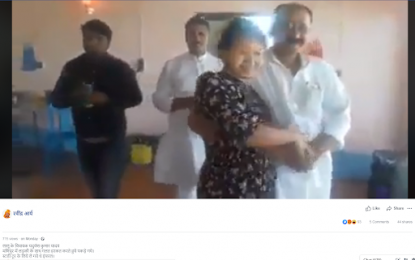 The claim is false; neither of the two men dancing with a woman in the video and wearing white clothes – often worn by Indian politicians, as described in this article on online news site The Quint – is Yadav.

The image below compares screenshots showing the two men dressed in white in the video (1 and 2) and a screenshot from this June 10, 2019 Facebook video featuring Yadav (3):

Although Yadav and man (1) look similar, man (1) has a longer nose and dark hair on the top of his head.

Below is a collage of four other photos of Yadav, showing that he is bald on the top of his head.

Photo (1) was taken from his Bihar Legislative Assembly profile; the others are all from posts on his Facebook page dated November 2016 (photo 2) and August 2016 (photos 3 and 4): 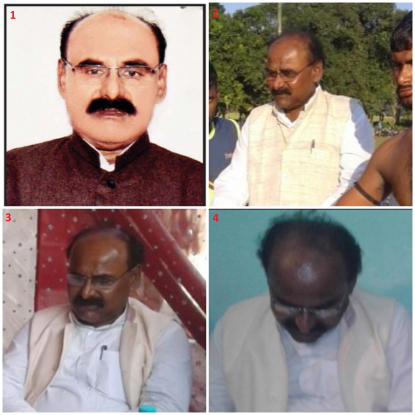 Collage of Yadav's four other photos

Another report, published here on the website site of regional daily Imphal Times on June 9, 2019, says that a group of lawmakers from Bihar visited Manipur on a trip that was co-led by Yadav.

The third paragraph of the Imphal Times report says:

“The members of the Committee led by MLA Yaduwanch Kumar Yadav of RJD visited border town Moreh on June 1, 2019 to take stock of the development program being taken up under the auspicious Act East Policy of the Government of India. They were reportedly guided by staffs of the Manipur State Legislative Assembly.”

Moreh is a town on the India-Myanmar border, located here on Google Maps.

The Imphal Times report says that the video shows MLAs, or lawmakers, “enjoying sexy dance with teenage girls” on the Myanmar side of Moreh.

It does not directly say that Yadav appears in the video or was involved in the dancing.

According to this June 10, 2019 article in the Hindustan Times and this June 11 article on local news site NE Now, the Manipur Legislative Assembly demanded the Imphal Times correct its “misleading” report.

Below is a screenshot of the documents issued to the Imphal Times by Manipur Legislative Assembly, as published by NE News: 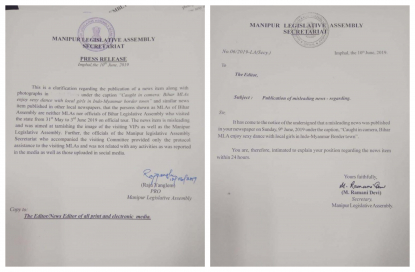 Responding to the request for clarification, the Imphal Times published this article on June 11, 2019, including a photo of the “study tour” group with two men’s faces circled in red, as seen in the screenshot below.

Text on the group image says: “Can the Assembly authority tells who are these persons?”: 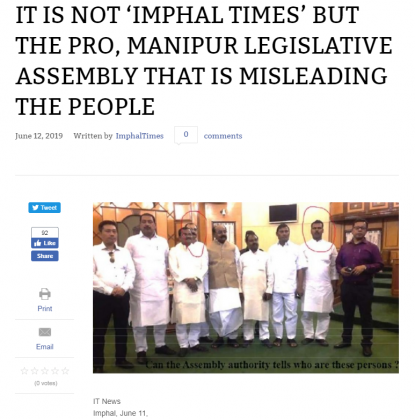 Screenshot of the Imphal Times report

Yadav appears in the Imphal Times photo; he is in the middle of the group wearing a beige waistcoat. He has not been circled in red.

The faces of the men circled in red appear to match those of the men in the dancing video.

Below is an image comparing screenshots of the Imphal Times picture (top) – with faces of two men circled in red by the daily, and in blue by AFP – and close-ups of the men from the dance video (bottom).

Man (1) in the Imphal Times photo has hair on the top of his head; Yadav, standing next to him, is bald: 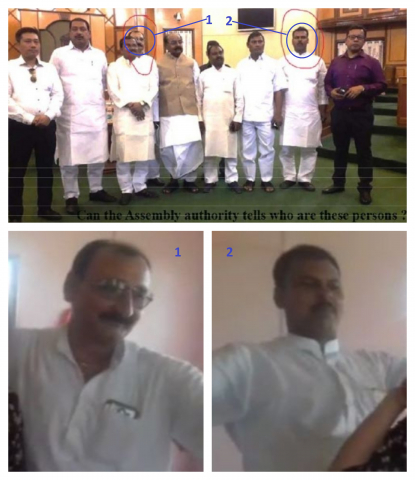 The men are actually aides of another lawmaker from the ruling regional party in Bihar, Janata Dal United (JDU); here is the party’s Facebook page.

JDU lawmaker Raj Kumar Rai, who was also a part of the visiting delegation of Bihar MLAs to Manipur, admitted to news channel Republic World here that the two men seen dancing in the video are local people from his constituency, who were visiting Manipur with him.

The JDU lawmaker has also reportedly removed one of his aides seen in the video, according to this Times of India report.

No, this video does not show the arrest of the star of a Filipino TV show critical of the police -- it’s clickbait using footage from an unrelated news report

No, this video does not show lava flow in Austria