No, this video does not show actress Bella Ramsey breakdancing

A video has been viewed hundreds of thousands of times in multiple posts on Facebook and YouTube which claim it shows Game of Thrones actress Bella Ramsey breakdancing. The claim is false; the video shows a young Russian dancer called Liza Petrikova. 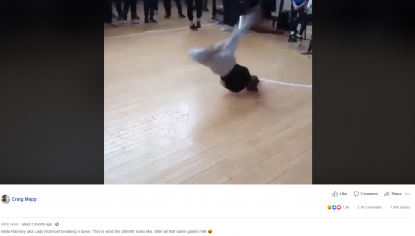 The caption states: “Bella Ramsey aka Lady Mormont breaking it down. This is what the afterlife looks like, after all that damn giants milk”.

Bella Ramsey is a British actress known for her role as Lady Lyanna Mormont in the TV series Game of Thrones.

Some of the comments on the misleading post showed that some people believed the video was of Ramsey. The image below features four of these comments, with the users' identities redacted:

The same video has also been shared elsewhere on Facebook with a similar claim, for example here and here.

The same video was also shared here and here on YouTube with a similar claim.

A reverse image search on Google for keyframes of the video found the same video posted here on Instagram by an account under the name Liza Petrikova on February 17, 2019:

The Instagram post's Russian-language caption translates to English as: “Today I judged selection rounds for the battle of styles”.

Other posts published on Petrikova’s Instagram account, including here and here, show her participating in various dance competitions in Russia.

In this photo posted on January 28, 2019, Petrikova posed with comedian Maxim Galkin, who is the host of Russian television show The Best.

Petrikova’s performance on the show can be seen at the 4:20 mark in a video published here on the Channel One Russia website.

No, this video does not show a Kuwaiti singer demanding the construction of a Hindu temple in India

No, this video does not show an aircraft cabin on a British Airways flight from London to Islamabad