No, this photo does not show a woman who was assaulted by Indian police

Two photos that show a woman covered in blood standing next to Indian policemen have been shared hundreds of times on Facebook in posts that claim there is police brutality against women under the current Indian administration. The images are being used out of context; they have been taken from media reports about a woman seeking police assistance after being assaulted by a gang of men in 2016.

This post, which has been shared hundreds of times since it was published on Facebook on June 25, 2019, contains the two photos of the woman with a bloody face.

The post’s Hindi-language caption states: “This is the slogan of Modi & Yogi Beti Bachao where policemen are mercilessly assaulting the daughters, what would you say to this? Modi - Yogi shame shame.” 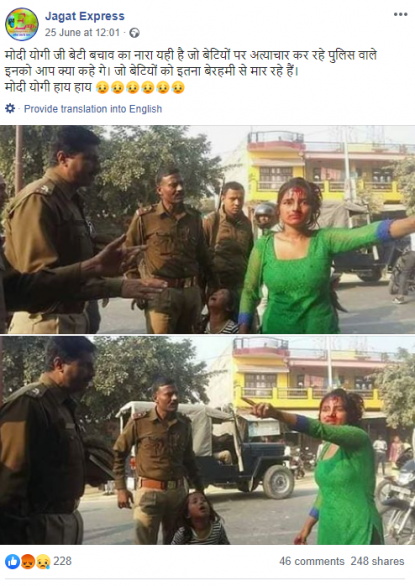 Narendra Modi is India’s prime minister, while Yogi is a reference to Yogi Adityanath, the chief minister of northern Indian state Uttar Pradesh.

Beti Bachao refers to “Beti Bachao, Beti Padhao” which means “save the daughter, educate the daughter” in Hindi and is a campaign launched by Modi in 2015. Here is an official campaign web page.

The same photos and caption were also shared elsewhere on Facebook, for example here.

A Google reverse image search led to this footage of the same incident published by Indian news site The Quint on December 22, 2016.

The article is headlined: "Couple Attacked in UP’s Mainpuri for Resisting Lewd Remarks". Mainpuri is a district in the north Indian state of Uttar Pradesh.

According to the Quint report, the woman and her husband were beaten when they challenged a group of men for making lewd remarks.

Below is a screenshot of one of the photos in the misleading Facebook post with key identifying features highlighted in red by AFP:

Below is a screenshot from the video in the Quint report, with the corresponding features highlighted: 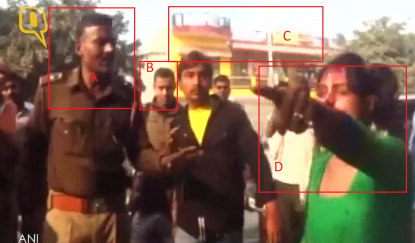 In boxes A & B, the faces of the police officers correspond with the officers seen in the misleading post.

Box C shows a yellow house in the background, and box D highlights the bleeding woman in a green dress.

Another reverse image search on Google found the photos in the misleading post also appeared in this video uploaded on December 23, 2016 on the Youtube Channel of the New York Post with the caption: “Indian woman brutally beaten by a mob of men after resisting a groping creep.”

Below are two screenshots taken at those timestamps in the New York Post video: 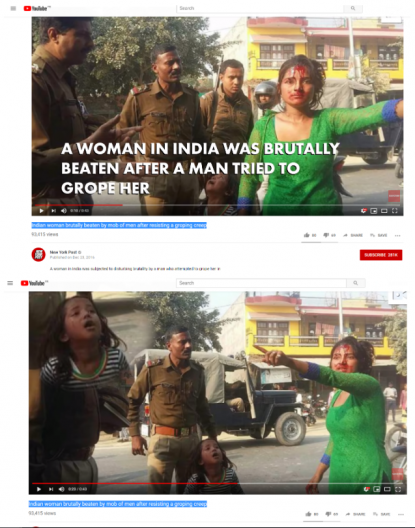 The report reads: “Uttar Pradesh police has arrested a man for brutally beating a woman in a marketplace for resisting molestation."

A case has been registered at Kishani area police station in Mainpuri against the three miscreants.”

Current Uttar Pradesh chief minister Yogi Adityanath assumed his role as the head of the north Indian state on March 19, 2017, according to this The Hindu report.