No, US President Donald Trump did not tweet about Botswana and South Africa pledging troops to fight Iran

Screenshots shared thousands of times on Facebook and Instagram purport to show two tweets from US President Donald Trump’s official account claiming Botswana and South Africa had pledged military support in the event of a war against Iran. But Trump did not write these tweets: both were fabricated.

The first screenshot shows a tweet purportedly by Trump that gives the impression that South African President Cyril Ramaphosa has agreed to reinstate conscription - which ended in 1993 - should the United States need troops in a conflict against Iran. 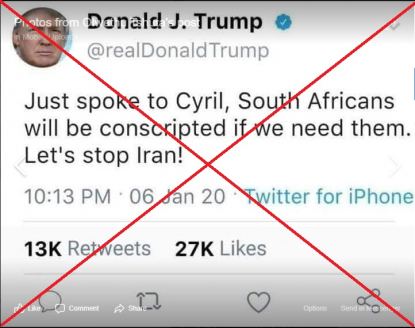 A screenshot of a purported tweet by US President Donald Trump

On Facebook, it has been shared 7,900 times and viewed more than 700,000 times, with another 20,000 views on Instagram. We’ve archived several of the posts sharing it here, here and here.

The second screenshot of a tweet purportedly by Trump claims that in a phone call with the US president, Botswana President Mokgweetsi Masisi committed 10,000 troops and another 5,000 “Batswana who will be picked randomly by his force”. 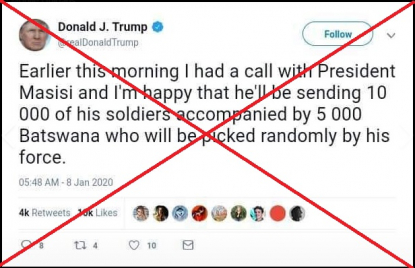 A screenshot of another purported tweet by US President Donald Trump

It has racked up 630,000 views on Facebook and been shared 6,900 times. We’ve archived several posts sharing it here, here and here.

One Facebook account here posted both screenshots along with various pictures (see samples below) that clearly spoof the idea of troop deployments by the two southern African nations. 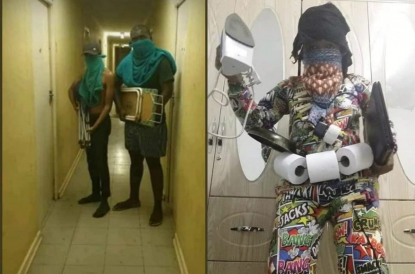 Clues the tweets are fake

The false tweets, below, have different fonts to Twitter's customary type. Although the one on the left is less obvious, the Retweets and Likes are distinctly larger than usual while the letters are broader.

The fake tweets have placed the day first and the one on the left has omitted half of 2020.

AFP verified this using Trump Twitter Archive, an online tool which documents all of Trump’s tweets and allows searches on individual words and phrases.

Our searches show Trump has never used the words “Cyril” or “Masisi”. 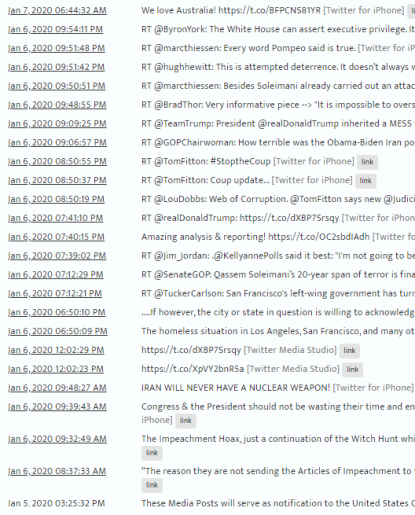 A screenshot of US President Donald Trump's official tweets on January 6, 2020

Robert Mearkle, US embassy spokesman in Pretoria, confirmed the two screenshots attributed to Trump were “fake”.

AFP will add comment from the presidencies of both South Africa and Botswana, should they respond to our email requests.

But this January 8, 2020 response on Twitter from Athi Geleba, head of digital communications in Ramaphosa’s office, dismissed one of the purported Trump “tweets” outright.

Geleba’s tweet, in turn, was retweeted by the government’s foreign affairs department, officially known as International Relations and Cooperation (DIRCO). 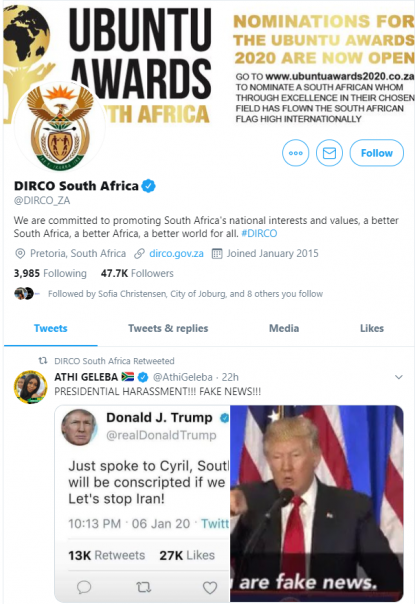