No, Trump did not endorse Nigerian candidate Atiku Abubakar

As the final hours tick down until Nigeria’s 2019 presidential election, a video has surfaced on Facebook claiming to show US President Donald Trump endorsing opposition presidential candidate Atiku Abubakar. Trump has made no such endorsement, and the video is a doctored version of footage showing the American president in October 2017, signing an executive order weakening the health reforms known as Obamacare.

The video, which has been shared more than 3,000 times, was posted with the caption: “Breaking News from Capitol Hill, Washington D.C: United State President Donald Trump has officially endorsed Alh Atiku Abubakar as the incoming president of Nigeria.” 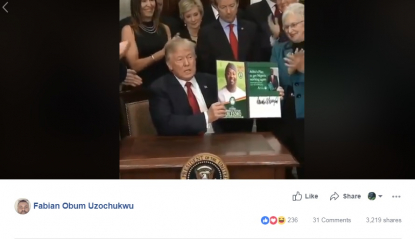 A screenshot taken on February 22, 2019 of the doctored Trump footage

The original version of the footage from October 2017 can be found on the official YouTube channel of the White House.

Many viewers identified the fake Atiku endorsement as a doctored video or took it as a joke, though others took it seriously or questioned how the doctoring was possible.

“Is this really a photoshop? How is it possible! Pls someone I really want to know,” read one comment under the video.

Numerous meme generators can be found online which allow anyone to make Trump appear to sign anything they want -- sites which have been used to produce a large volume of jokes and satirical posts since he became US president in 2017.

For example, this meme generator was used to create the image below. 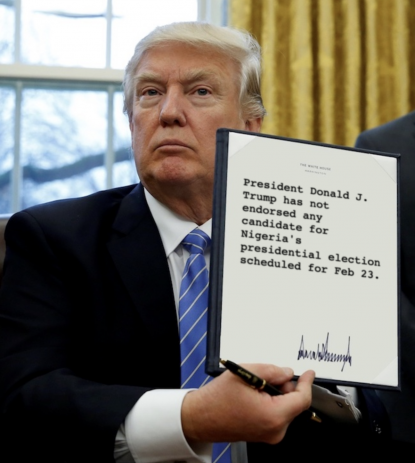 The Nigerian government has called on the international community not to interfere in the elections, although Foreign Minister Geoffrey Onyeama has said that impartial support in delivering a free and fair election is welcome.

On February 15 -- the eve of the initial election date before it was postponed until February 23 -- the US government said Secretary of State Mike Pompeo had spoken with both President Muhammadu Buhari and his main rival Atiku.

“He underscored U.S. support for the Nigerian goal of free, fair, transparent, and peaceful elections that reflect the will of the Nigerian people,” the State Department said in a statement after the phone calls.