No, these photos do not show the Israeli city of Tel Aviv devastated by an earthquake

Multiple Facebook posts shared tens of thousands of times contain three photos alongside claims they show the Israeli city of Tel Aviv devastated by an earthquake. The claim is false; the images are old photos of earthquakes in China and Chile. 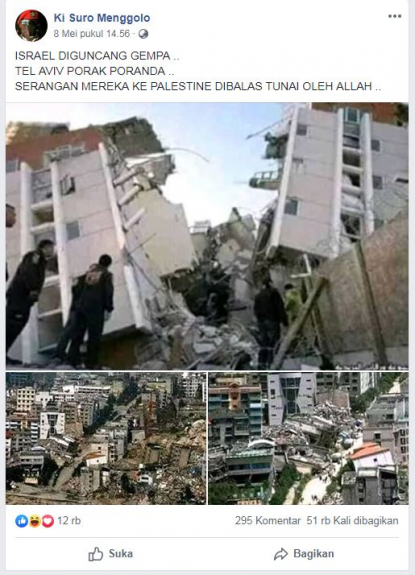 The first image shows a building broken into two parts with some men in black observing the ruins.

The other two images show devastated buildings from a distance. The same buildings appear in both the second and third image, but the third shows some of them in more detail.

Translated to English, the Indonesian-language caption of the first Facebook post reads:
“Israel was rocked by an earthquake ..
Tel Aviv is devastated ..
Their attacks to Palestine have been reciprocated directly by God ..”

Tel Aviv is one of Israel’s main cities. Here is the city’s official website.

AFP conducted reverse image searches on Yandex and Google to trace the origin of the images.

A search on the first image that shows men standing in front of a collapsed building returned a number of news articles, including this February 28, 2010, report by German newspaper Hannoversche Allgemeine Zeitung.

The same image was published as the article’s main photo and credited to German news agency Deutsche Presse-Agentur (dpa), whose website is here. 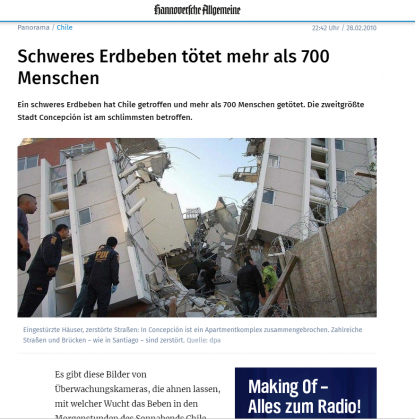 Screenshot of report by a German newspaper

Translated to English, the caption of the main photo in the German-language article reads: “Collapsed houses, destroyed streets: An apartment complex collapses in Concepcion. Numerous roads and bridges, as in Santiago, are destroyed. Credit: dpa.”

The headline of the article, translated into English, reads:
“Major earthquake kills 700 people
A major earthquake hit Chile and killed more than 700 people. The second largest city, Concepcion, was the worst hit.”

This AFP photo taken in November 2011, taken a year after the quake hit, also shows the same building from a different angle.

Below is a screenshot of the photo as it appears on the AFP Forum website: 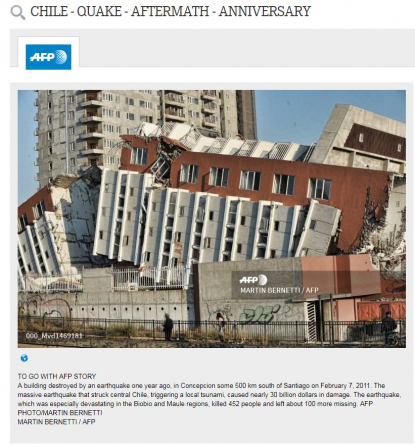 Below is a side-by-side image comparing the building as shown in the Facebook post (L) and the AFP photo (R), with similar features circled in red:

The other two photos in the Facebook post that show a devastated city were in fact taken in Beichuan, in China’s Sichuan province, which was hit by a quake in 2008.

The same image was published by CNN in this May 4, 2009 article.

Below is a screenshot of the image in the CNN article: 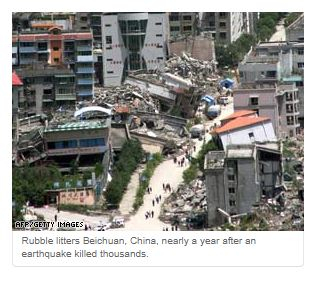 Screenshot of a photo as shown in CNN's website

The caption of the CNN photo reads: “Rubble litters Beichuan, China, nearly a year after an earthquake killed thousands.”

Below is an image comparing the two photos in the Facebook post (L) and (R) and the CNN photo (Bottom), with similar features circled in red: 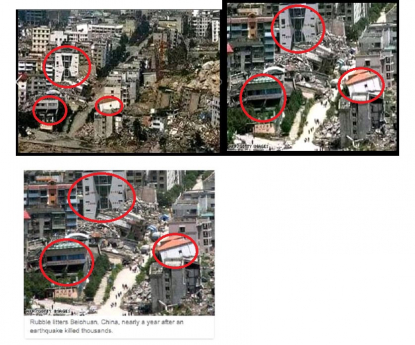