No, these are not photos of an Indian Congress party leader detained over a plot to kill Hindus

Multiple Facebook and Twitter posts have shared three photos which they claim show an Indian Congress party leader in police custody in Assam after he was caught carrying grenades and ammunition for a plot to kill Hindus. The claim is false; the photos used in the post are old, unrelated images from Kashmir and Bangladesh.

The posts, for example here on Facebook and here on Twitter, contains three photos: one shows a handcuffed man being escorted by police; one shows a mugshot of the same man; and the final photo shows grenades and bullets laid out on the ground alongside a bag of apples.

The Hindi language caption translates to English as: “Congress leader Amjat Ali was caught with explosives and weapons hidden in an apple basket inside a mosque in Assam. He was plotting to kill Hindus, police arrested him.” 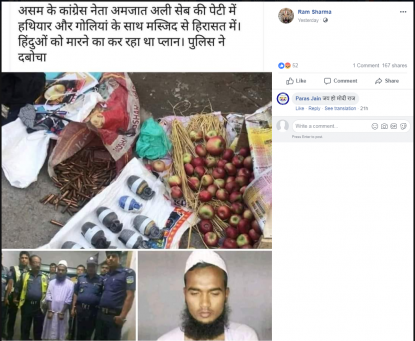 The post comes ahead of general elections in India starting on April 11, which will see Prime Minister Narendra Modi and his Hindu nationalist Bharatiya Janata Party (BJP) seek a second term.

Here is an AFP report on the announcement of elections.

AFP contacted Abdul Khaleque, a state lawmaker and media spokesperson for Congress in Assam to ask whether there was any leader in the party with the name Amjat Ali.

“There is no minister or politician by the name of Amjat Ali in Assam Congress,” he told AFP.

The photo of Ali’s purported weapons actually shows arms and ammunition seized by Jammu and Kashmir police after a firefight with militants. AFP established this through a reverse image search on Google.

The official Twitter account of the Jammu and Kashmir police shared the same image on October 29, 2018, with a caption saying: “A brief exchange of fire on the outskirts of Srinagar city. Three suspected militants arrested among them one is injured.Arms and ammunition recovered. Investigations started.”

A brief exchange of fire on the outskirts of Srinagar city. Three suspected militants arrested among them one is injured.Arms and ammunition recovered. Investigations started. pic.twitter.com/lT9AoRnu5H

The photo was widely used in reports on the incident, for example here and here.

Using further reverse image searches on Google, AFP established that the second photo in the misleading post of a man in police custody shows a man identified in Bengali language reports from May 2018 as Mobarak Hossain.

Multiple Bengali-language articles included the image, for example here on May 17, 2018, as they reported Hossain was arrested for the alleged rape of a student in Trishal, Bangladesh. 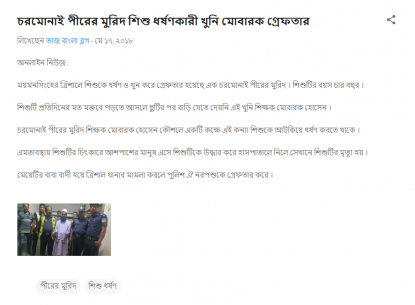 According to AFP's Dhaka bureau, the police in the image are wearing Bangladeshi police uniforms. 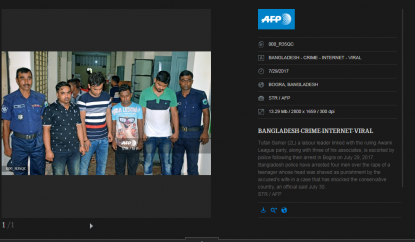 A screenshot of the photo in the AFP archive

A reverse image search on Google of the third photo led to this Bengali language news article published on May 5, 2018.

It also reported on the arrest of Mobarak, who police alleged had raped a student who subsequently committed suicide.

Below is a screenshot of that report. 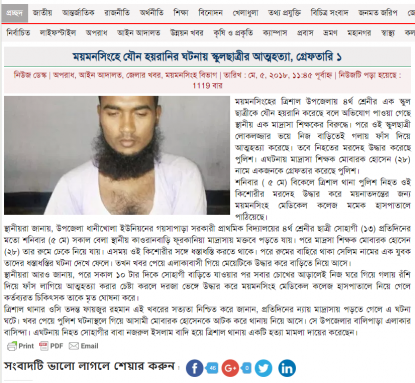 A screenshot of the Bengali language news report

An AFP journalist in Bangladesh spoke by phone to Azizur Rahman, police chief in Trishal, who confirmed that a man named Mobarak Hossain was arrested in May 2018 on charges of inciting suicide. His trial is ongoing.