A photo of a worm-infested heart has been shared tens of thousands of times in Facebook posts that claim it belonged to a child who died after he caught the parasites through contact with a pet dog. The claim is false; the photo shows a dog’s heart, not a human heart, and experts say the disease is not fatal for humans.

The image has been shared multiple times on Facebook, for example here, and in this post shared more than 89,000 since it was published on March 6, 2019.

There is text above the photo of the heart that says: “A bad practice is to humanize pets. I’m sending you a kid’s heart that, due to sleeping and kissing his dog, it transmitted its parasites.

“Those parasites blocked his heart and he died here at the Children’s Hospital. Please forward this to family and friends.” 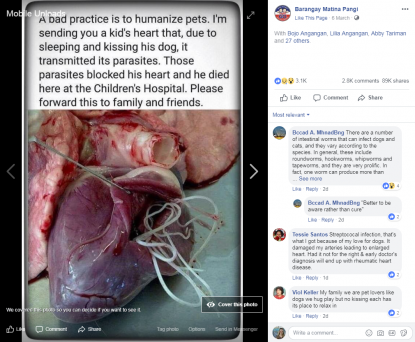 A reverse image search found that the same photo appeared in this article on the website of the American Society for Microbiology, which says the research was published online on July 3, 2012.

The article, titled “Human and Animal Dirofilariasis: the Emergence of a Zoonotic Mosaic”, uses the photo with the caption: “Fig 2: Male and female adult worms of D. immitis in the heart of a dog”.

Below is a screenshot of the photo as it appears in the article: 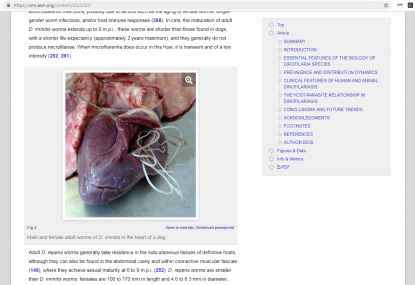 The US Centers for Disease Control and Prevention (CDC) has an FAQ page on its website here about the disease caused by the worm mentioned in the scientific article, D. immitis – also known as “heartworm”.

It says: “D. immitis adult worms can cause pulmonary artery blockage in dogs, leading to an illness that can include cough, exhaustion upon exercise, fainting, coughing up blood, and severe weight loss.”

The CDC site says that the disease can occur in humans but it is very rare, with just 81 cases reported in the US between 1941 and 2005, and affects human lungs, not the heart.

AFP spoke by phone to Jan Slapeta, Professor of Veterinary and Molecular Parasitology at the University of Sydney, who said the image in the Facebook post was misleading and that heartworm disease was “not fatal” for humans.

“There is no such thing as a human heart in this way. I’m not aware of any worm of this size that would be in the bloodstream of a human,” he said, referring to the photo.

In humans, heartworm disease is “very rare and really causes nothing. It’s what we call asymptomatic”, he said.

Both Professor Slapeta and the CDC website said that humans can only be infected with heartworms through mosquito bites, not by sleeping next to or kissing a dog.

This article, titled “Can humans get heartworms from dogs?”, was published on healthline.com and medically reviewed by a doctor on July 31, 2018, according to the website. It corroborates the information given by Professor Slapeta and in the CDC article.

It says: “You can’t get heartworms from your dogs, cats, or other pets – only from mosquitos that carry the infection.

“Most heartworm microfilariae die on their way through the skin. Even if they do get into your blood somehow, heartworms can’t mature and will eventually die off.

“In most cases, heartworms in humans aren’t a serious problem unless they cause pain, discomfort, and other noticeable symptoms.” 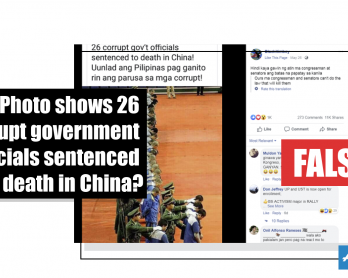 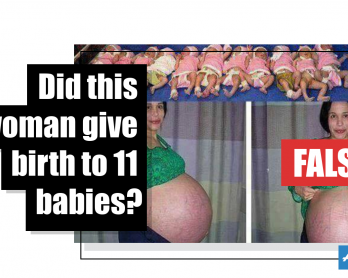 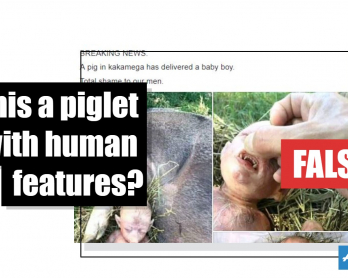 No, Indonesian presidential candidate Prabowo Subianto was not an academic prodigy who attended university aged 12