No, this photo does not show ‘kidnapping syndicates’ in the Philippines targeting people for their organs.

A photo of mutilated bodies has been shared tens of thousands of times in Facebook posts alongside a claim that “kidnapping syndicates” in the Philippines are targeting people for their organs. The posts are misleading; the photo actually shows bodies of prisoners killed in a prison riot in Brazil in 2017.

The photo was posted on Facebook, for example here on March 3 where it has been shared more than 130,000 times. 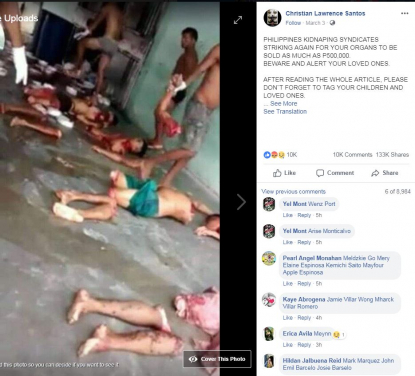 Part of the lengthy caption of the post states in English: “PHILIPPINES KIDNAPING SYNDICATES STRIKING AGAIN FOR YOUR ORGANS TO BE SOLD AS MUCH AS P500,000. BEWARE AND ALERT YOUR LOVED ONES.”

The same photo was shared in a Facebook post here with an identical caption on March 2. It has received more than 34,000 shares.

Through a reverse image search, AFP established the image originated from footage which has circulated online since at least January 2017 in relation to reports of a prison riot in Brazil.

AFP did not locate the footage on any mainstream media websites, likely because of its graphic nature.

Below is a screenshot of the footage on Vimeo, published on January 19, 2017: 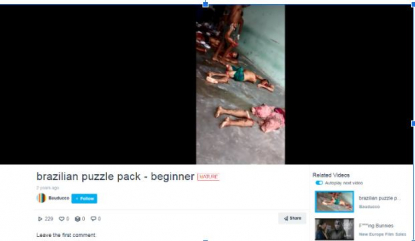 The same video appeared on YouTube here on February 12, 2017.

A website named “Gore Brasil” published the footage in an article dated January 18, 2017.

Below is a screenshot of the article on the website: 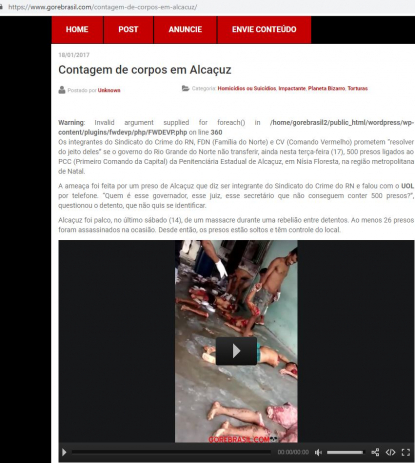 A journalist in AFP’s Brazil bureau translated the article from Portuguese to English finding that it was a report on a riot at Alcaçuz prison on January 14, 2017.

He analysed the footage, which the report claimed was filmed from inside the prison, and established people in the clip could be heard speaking Portuguese with a Northeast Brazilian accent.

At the 20 seconds mark in the video, a man wearing a t-shirt with the words “POLICIA CIVIL” printed on the back can be seen. 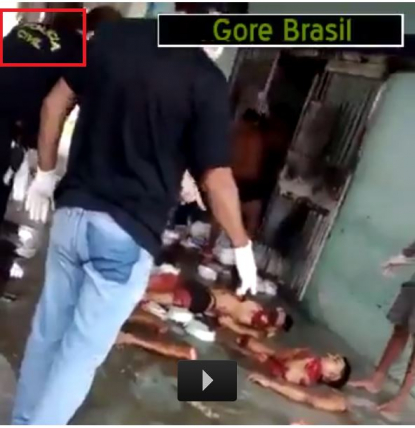 Below is a screenshot of a photo showing a similar t-shirt worn by Brazilian police on a Brazilian news site on February 3, 2018. 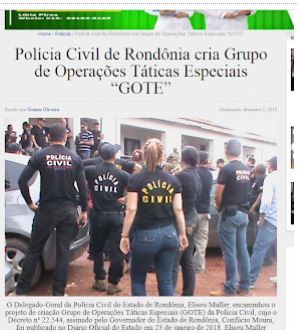 Alcaçuz prison, located in the northeastern state of Rio Grande do Norte in Brazil, was the site of a riot on January 14, 2017. Here is an AFP report published on January 16, 2017, about the incident, and here is an AFP video of the police response.

AFP contacted Alcaçuz prison about the footage but it did not respond to queries about where the video had originated from.

AFP photos from inside the prison on January 14, 2017, show similar scenes of mutilated bodies.

The caption on this photo reads: “Handout picture taken on January 14, 2017 of the Alcacuz Penitentiary Center near Natal, Rio Grande do Norte state, northeastern Brazil showing a decapitated inmate during a prison riot. At least three inmates were beheaded during a fight that broke out between two criminal gangs, authorities said.”